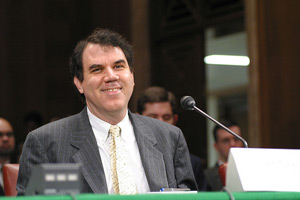 Alan Grayson, the freshman Democrat made famous by his suggestion that Republican health care plan was for people to “die quickly,” has lost his reelection bid. The fiery congressman was among the GOP’s top targets; Politico dubbed his district “ground zero” for outside attack ads by deep-pocketed conservative groups such as the 60-Plus Association and the US Chamber of Commerce. Nonetheless, Grayson seemed to think that by playing the populist and saying exactly what he thought, he could get reelected even in an anti-incumbent, GOP year, in a traditionally red district. He was wrong. He also thought that his solid record of delivering for his district—his predecessor didn’t bring back much in terms of pork—would help him. It didn’t seem to.

Now that Grayson’s on his way out, it’ll be interesting to see if anyone tries to copy his model. He’s certainly entertaining—and he made a real difference in Congress. He was a pioneer in the use of YouTube and two-minute speeches. He sided with the tea partiers against the Federal Reserve. And he was enormously skeptical of big banks and their allies.

In the recent foreclosure debacle, which introduced regular Americans to “robo signers” and “foreclosure mills,” Grayson was a leading voice demanding investigations and highlighting the most glaring problems with the foreclosure pipeline. His pressure, combined with dozens of other members of Congress, helped to spur a nationwide probe involving by all 50 state attorneys to scrutinize into banks’ alleged wrongdoing in the foreclosure process.