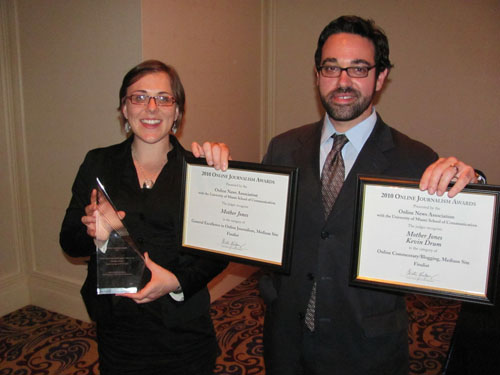 Just in case the grins on the faces of reporter Kate Sheppard and news editor Dan Schulman don’t tell you everything you need to know—yes, we are  honored and proud today to have won the Online News Association award for Online Topical Reporting/Blogging for our team coverage of the BP spill. For much of the summer, Mother Jones actually had more reporters covering the disaster than most dailies or TV news operations around the country: Our human-rights reporter Mac McClelland was on the scene for four months while Kate in Washington kept up the heat on agencies and politicians, and environmental correspondent Julia Whitty explored the stunning new science that shows the true impact of BP. It was an amazing endeavor, involving literally everyone at MoJo at one point or another and drawing on major effort from many (reporters, editors, factcheckers, tech crew—you know who you are). You can read the results here.

Fun fact: As far as we can tell, Mother Jones was the only magazine (that doesn’t publish exclusively online, a la Salon) honored at the ONA awards last night; the event has long been dominated by daily newspapers, broadcasters, and online-exclusive news sites, which makes sense given that much of the magazine industry has not exactly stampeded into digital news. Here at MoJo, though, we pretty much tore down the distinction between print and digital several years ago, and now aim to bring you sharp, sassy investigative reporting 24/7 via the Interwebs as well as in our award-winning print magazine (you do take advantage of our dead cheap subscriptions, right?). So hooray for an award confirming that that’s working out okay—and an extra hooray for all the other great journalism shops honored last night, including our fellow nonprofits at NPR, ProPublica, the Center for Investigative Reporting, and California Watch. (Bonus hooray for these last two, fellow Bay Area operations. Now back to the World Series already in progress.)