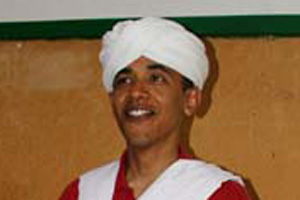 Conservative pundit Dinesh D’Souza’s latest lunatic theory—that Barack Obama’s presidency is explainable as a continuation of the “Kenyan anti-colonialist” politics of his father—doesn’t really deserve a rejoinder. Obama was deeply disillusioned with (some might say hated) his father, and the idea that he would model his entire presidency on the politics of a man he essentially disowned is patently ridiculous. But the worst ideas sometimes draw the best (and most useful) rebuttals, and D’Souza’s almost non-stop crankery is clearly a magnet for epic takedowns. Four years ago, Andrew Sullivan did the honors on D’Souza’s book blaming the Left for 9/11. This time around, the Weekly Standard‘s Andrew Ferguson is playing the Mike Rowe role. You should read the whole piece, but here’s the most important part:

Trained as a young man by Jesuits, D’Souza must be familiar with the principle of Occam’s razor: The simplest explanation is always the best; if it fits the case at hand, there’s no need to go looking for more complicated theories. Yet there’s a cramp in the mind of the committed party hack, a terrible need to believe that one’s adversaries are more ominous or sinister than observable reality suggests. Thus Bill Clinton wasn’t merely an opportunist; he had to be a committed leftist and a criminal to boot. George W. Bush wasn’t merely a well-meaning, incompetent conservative; he had to be a Falangist. What Obama truly represents—unchecked liberalism, genus Americanus—is worrisome enough without dragging in the sad, gin-soaked carcass of his father or the hypnotic power of Roberto Mangabeira Unger.

Now, two years into the Obama administration, we’re finally getting somewhere. Obama turns out to not be a Marxist, Nazi, Muslim, or Hippie. He’s just a liberal (and far from an all-out liberal, at that). Conservatives and liberals disagree about lots of important, core issues. So for one group, being a part of the other should be bad enough. There’s really no need to bring Nazism or fascism or the Taliban or Kenyan anti-colonialism into the discussion.