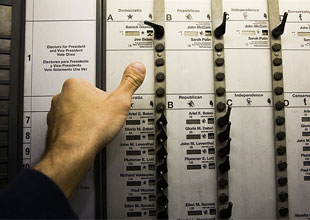 When the Illinois Republican Party launched its anti-voter-fraud crusade this year, party leaders knew who they could count on to whip up a fervor about rigged elections. Together with a conservative political action committee, the state GOP has teamed up with a infamous anti-Obama birther who’s helped to recruit tea party activists to oversee the vote as official poll workers and independent poll watchers—part of a campaign against election fraud (real or imagined) that’s being whipped up by Republican leaders and activists across the country.

Every election season, the right revives its battle against voter fraud, depicting it as a rampant threat to honest electoral outcomes. (See the previous assault on ACORN, the beleaguered community organizing oufit.) This year, the Republicans have a tea party army on hand to fight this supposed peril. And they’ve taken their campaign a step further. Political parties and outside groups typically dispatch independent poll watchers to keep tabs on any suspicious activity. However, recruiting activists to serve as election judges and poll workers—the people who actually administer the vote at polling stations and are responsible for ensuring that election laws are enforced—is not a routine practice. But that’s what’s happening this year in Illinois, Texas, and elsewhere, with the GOP looking to tea party and conservative grassroots activists to fill key slots.

In the Fort Worth area of Texas, where Democrats have made significant gains in recent years, tea party activists have been spreading a request from the Tarrant County Republican Party for poll workers and watchers in Democratic precincts. “Some locations are not in very safe areas, so this is not for the timid,” warns a notice on the NE Tarrant Tea Party message board. The Tea Party Patriots’ national organization is dispatching poll watchers “to secure our polls” in key swing states and districts. And despite the dissolution of ACORN, conservative organizers insist that people formerly affiliated with the group are plotting with Democratic allies to rig elections. “If you want to make a difference you need to make sure there are no shenanigans,” Adrian Murray, coordinator for Fort Worth’s Glenn Beck-allied 912 group, says in an interview. “Any former affiliates of ACORN are very, very experienced with this.”

In Minnesota, the North Star Tea Party Patriots have teamed up with two other conservative groups to spearhead a far-reaching anti-fraud operation to recruit and train spotters at the polls, offering $500 for tips leading to voter fraud convinctions. In Illinois, meanwhile, the state GOP has joined with a political action committee called Illinois Republican Renaissance to form an “election fraud prevention task force” that aims to turn right-wing grassroots activists into official election workers and privately paid watchdogs. “As you know, ballot integrity will be a key ingredient to our success, and we need your help,” GOP state chair Pat Brady says on the party’s website. This effort has placed Brady in league with one of the tea party movement’s more unusual characters. The project’s coordinator, Sharon Meroni, is an infamous anti-Obama birther who filed objections against 32 Illinois candidates for failing to provide adequate documentation of their citizenship.

Meroni, who blogs under the pseudonym “Chalice Jackson,” also helped launch a petition demanding Obama’s resignation for “high crimes and misdemeanors.” “Who truly would have believed…that there was ANY chance America could be in the hands of a usurper government?” she wrote in another court filing to contest Obama’s citizenship, which the McHenry County Grand Jury dismissed. Meroni is now helping to select the election judges—as official poll workers are called in Illinois—and poll watchers that the joint project will dispatch on Election Day. (Campaigns have jumped on board the Illinois Republican Party’s effort as well: In a secretly recorded private conference call, GOP Senate candidate Mark Kirk said he was pushing to deploy “lawyers and other people” to two predominantly black Chicago neighborhoods to oversee the voting process.)

While the calls for tea party poll workers and poll watchers tend to focus on keeping the movement’s favorite boogeymen at bay, there’s also an extra benefit: cash. “Defeat ACORN, SEIU, and the Chicago Machine and Make $3200 Doing It!” says one announcement posted on the website of the Illinois Sons of Liberty, a group for tea party-types who are into motorcycles. “We’re working with the Republican Renaissance Group to recruit 200 Election Judges for each of the Early Voting sites located in Cook County…” The Sons of Liberty message goes on to say, “Many of us in the Tea Party Movement do not consider ourselves to be Republicans. But the only option we have to help keep this election fair and counter Cook County Democrats is to serve as Republican judges.”

The Illinois Republicans/tea party joint venture largely escaped the attention of local Democratic officials and operatives. Perhaps that’s because the Illinois GOP and its partners haven’t made too much noise about the effort. (A description of the project on a website created by Meroni’s tea party portal, the Patriot’s Heart Network, to recruit volunteers is no longer accessible.) Instead, they seem to be relying on grassroots supporters to spread the word. Like this local blogger, writing on Conservatives4Palin.com: “In Chicagoland, Democrats never have any problem filling those [poll worker] slots, because the unions, ACORN, and all sorts of other shady organizations send their members to fill the positions: where they…look the other way as Democrat operatives game elections through voter fraud, intimidation, ballot tampering, and all sorts of other hijinks. The only reason they do is because Republicans forfeit these areas to them.” (Meroni declined to comment, referring queries* to the Illinois GOP’s executive director, Curt Conrad. Conrad and the Illinois Republican Renaissance did not reply to multiple requests for comment.)

Local tea party activists have been heeding the call in Illinois. “ACORN is still pretty fresh in people’s minds—it’s never been a large factor here in Chicago, but it has…in other states, ” says Steve Stevlic, coordinator of the Chicago Tea Party. As a result, he reports that “hundreds” of Illinois tea partiers have stepped forward to work the polls on Election Day in the Chicago area. “I know they actually have more people than they need,” notes Stevlic. In past elections, the Chicago-area GOP had been so devoid of supporters that they haven’t had enough warm bodies to fill the election judge positions at every polling station, where both parties have slots for two poll workers. This year, by contrast, the Chicago Board of Elections has “fewer open judge slots than ever before,” says Board spokesman Jim Allen.

Local election boards seem grateful that there’s greater public interest in filling chronic poll worker shortages. But many Democrats and election experts have expressed concern about placing activists driven by anti-fraud hysteria in charge of managing and overseeing voting stations. Democratic Cook County Clerk David Orr calls the fear-mongering about voter fraud “exploitative” and “beyond the pale.” Susannah Goodman, director for election reform at Common Cause, warns that overheated rhetoric about voter fraud could mislead those who end up working the polls into thinking their duty is to prevent their political opponents from stealing the election: “You become a poll worker not to defeat anybody—that’s not the job…States should protect voters from self-appointed vigilantes.”

Conservatives do point to a handful of isolated incidents to gin up fears about voting shenanigans. In Texas, an 81-year-old San Antonio woman has been charged with using her dead sister’s identity to vote in 2008. In the Houston area, a tea party-linked non-profit called True the Vote claims to have discovered “most likely tens of thousands, of incomplete, inaccurate, or false voter registration” in one of the city’s poorest black neighborhoods. (The progressive group facilitating the effort has acknowledged that a small number of the registrations were faulty.) In Missouri, a group of Somali immigrant voters was accused of receiving improper assistance during the primary election this year. But while election experts acknowledge that voter fraud certainly exists, some point out that only a tiny handful of fraud cases have ever been proven. And they say conservative activists risk suppressing or intimidating eligible voters by hyping the potential fraud.

However incensed they may be, tea party activists can’t simply slot themselves in to administer the vote. In most places, local elections boards or county commissions must greenlight the candidates that both parties nominate to be poll workers, and these people must go through official training. By becoming part of the voting process, tea party activists might actually gain more trust in the system, says Justin Levitt, a professor and electoral law expert at Loyola Law School.

Tea partiers and their conservative allies also insist they’re taking precautions when they dispatch their own poll watchers. Murray, the Fort Worth 912 group coordinator, says that his organization has been conducting trainings for hundreds of local activists “but with the guidance from the poll watchers’ guide from the Secretary of State.” Similarly, Minnesota’s “Election Integrity Watch” project has posted a lengthy list of Do’s and Don’ts for activists eager to conduct their own surveillance. “Be ready to follow suspicious busses [sic] if possible,” the website warns, adding that activists should “try not to be noticed following.” (Though cameras are prohibited in the polling place,” the site also recommends taking photos if “you can capture something blatantly illegal underway.”)

But there are already warning signs that tea party-related anti-fraud efforts could slip into dirty tricks territory. In Wisconsin, the state Republican Party had been accused of plotting with local tea party groups to disenfranchise voters whose ballots were returned because of a wrong address—an illegal technique known as “vote-caging.” Given the polarized political climate, overzealous activists working the polls could end up overstepping the bounds, intentionally or not. Referring to the GOP and tea party efforts to recruit poll watchers and workers, Wendy Weiser of the Brennan Center for Justice says, “We haven’t sent this degree of heightened activity for years. It’s just a higher risk situation for voters.”

*Story has been updated with Meroni’s response.