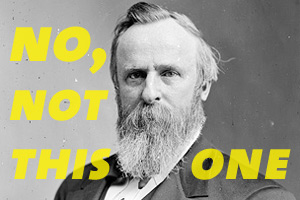 Earlier this week, I introduced you to Obama’s unlikeliest 2012 challenger (well, other than the Naked Cowboy): Rutherford B. Hayes, a Navy veteran and high-school dropout who’s the chief financial officer of Miss Liberty America, the first and only Tea Party beauty pageant. Yesterday, I spoke with Hayes about his campaign.

The first thing Rutherford Bert Hayes makes clear to me is that he is absolutely not related to the disgraced and undemocratically-elected nineteenth president, Rutherford Birchard Hayes. Nor is he even named for the man known to his contemporaries as “Rutherfraud.” “It is a coincidence,” he says. “Obviously, my dad is a Hayes. But my mother was not, obviously. And her grandpa was named Rutherford. And so it was just a coincidence, because she loved her grandfather, that she named me Rutherford. And then the last name just followed. The nineteenth president, his name was Birchard. And I’m glad I didn’t get that. I had enough problems with the name Bert as a kid. You know like, ‘Hey Bert, where’s Ernie?'”

Hayes is not a Birchard; he is, however, something of a birther: “My birth certificate is Rutherford B. Hayes. That is my real name. And I do have a birth certificate.” He explains later in our conversation, “I just kind of put that in there as a jab because [Obama’s] had issues with his birth certificate. And the first thing he did when he was in office was seal his records. I mean, I don’t kow all the aspects of this stuff, but there have been things that I’ve seen that definitely question it.”

With 106 weeks to go until election day 2012, it might seem a little early to get into personal attacks, but for Hayes, a self-styled constitutionalist who’s running as an independent, the stakes are high. He’s concerned that President Obama, like Clinton and both Bushes before him, is secretly planning on joining with Mexico and Canada to form the North American Union (a fear that’s also been expressed by Kentucky senate candidate Rand Paul). Were that to happen, he explains “our Constitution just by default would be void. That would disarm America. Because we’re the only country left where the citizens are allowed to have guns.” Which is why his first move as executive would be to deploy the Marines to the US-Mexico border, then give anyone who’s in the country without proper paperwork six months to get out. He says he’ll finish the border fence and then build another one 100 yards inside the border.

So far, the campaign hasn’t been easy:
Hayes, a political novice, says he spent the first month-and-a-half just figuring out the necessary paperwork. He’s his own campaign manager, and he doesn’t have any volunteers yet (he’s also yet to report a single contribution). He’s hit the road a few times, traveling to likely battlegrounds like Ohio and Nevada to press the flesh and introduce himself to voters. There have been a few bumps along the way. “I’ve had a couple of run-ins that weren’t really run-ins,” as he puts it.
For instance, he was recently thrown out of a VA hospital for campaigning on federal property (a no-no). He also finds it difficult to speak in front of large audiences, but he thinks he’ll get over it. Friends have told him he doesn’t stand a chance unless he joins the GOP, but Hayes, a McCain supporter in 2008 (“I don’t dislike Palin,” he volunteers), wants nothing to do with either party.

At the end of the day, Hayes says his message is one of accountability, something he practices by responding to comments on Facebook, no matter how inane they are. “Even if someone’s being a turd,” he says, “I still try to respond to them.”

“I’m not saying that I’m the only hope out there. I mean, if somebody else runs that has the same values that I have, we’re still in good shape. I’m a regular American, I think you can see that from my website. I am the opposite of everyone who’s running.”