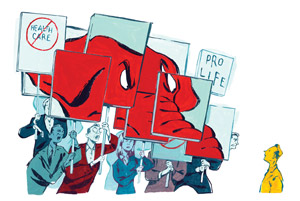 Pro-life Democrats come in two varieties: those who tout anti-abortion views on the stump, but largely end up voting with their pro-choice colleagues, and those—typically hailing from deep-red districts—who almost always vote pro-life. As abortion foes mobilize against “faux” pro-life Dems in November, you might think they were going to focus on the first group. But they’re really gunning for the second, traditionally the movement’s staunchest Democratic allies. We’re talking congressmen with ratings of 80 percent or higher from the National Right to Life Committee.

In May, abortion opponents claimed the scalp of the first member of this pro-life cadre—longtime Rep. Alan Mollohan (D-W.V.). The Susan B. Anthony List (a pro-life political action committee founded to counter the pro-choice powerhouse EMILY’s List) spent $78,000 to help defeat him in the primary, and has pledged to spend a total of $1 million to unseat other alleged traitors to the pro-life cause. With most of those members already in tough races, and other anti-abortion groups embracing similar strategies, at least a half-dozen pro-life Dems could be headed for defeat this fall.

The schism between pro-lifers and their Democratic allies goes back to the frantic final days of the health care debate, when Rep. Bart Stupak (D-Mich.) and a group of other pro-life Dems dropped their opposition to the legislation because President Obama had promised to ensure that no federal money went to abortions. But pro-life lobbying groups—especially the powerful US Conference of Catholic Bishops—didn’t follow suit, as the Stupak bloc maintains they’d been led to believe. Instead, the bishops and other anti-abortion organizations continued to claim (falsely) that the bill would fund abortions. This deprived the pro-life Dems of political cover and, in effect, painted targets on their backs.

Sister Simone Campbell, executive director of the Catholic social-justice organization Network, says several of Stupak’s colleagues told her they expected that “getting the best deal possible” on the abortion issue would “get the Conference on board.” Instead, she says, the members found themselves “hung out to dry.”

Stupak is now convinced that he was duped by the bishops and other pro-life groups that never really intended to back the bill. But that realization came too late for him and his colleagues—and perhaps for the Democratic majority. If all or most of the Stupak bloc members lose in November, it will bring the GOP that much closer to taking back the House.

In the end, though, the political calculus of the bishops and other abortion opponents could come back to haunt pro-lifers. Stupak and his crowd have delivered for their political allies, and with them gone, abortion foes would have to rely on Republicans—some of whom are not solid pro-lifers—while facing a Democratic president and a more firmly pro-choice Democratic caucus. Kristen Day, executive director of Democrats For Life of America, says fellow abortion foes have made a grave mistake. “The pro-life movement is going to lose, and we’re going to be responsible for our own demise.”

Update, October 22: Since this article came out, the outlook for pro-life Dems may have gotten worse. And the battle over abortion has affected Rep. Steve Driehaus’ reelection race in a big way.