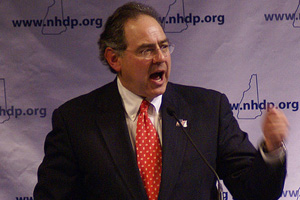 New Hampshire Democrat Paul Hodes is in hot water again this week for allegedly using push-polls in his campaign for Senate. On Thursday, the New Hampshire Republican Party filed a complaint with the state attorney general alleging that Hodes’ campaign had violated a state law banning push polls that don’t disclose who paid for them. (Push polls are phone surveys that purport to gather opinion research but which actually use slanted questions to intentionally spread negative information about a candidate.)

The GOP complaint comes only a few days after Mountain West Research Center, an Idaho-based firm working for Hodes’ campaign, agreed to pay a $20,000 fine for violating New Hampshire’s push-poll law during the GOP primary. (The Hodes campaign fired Mountain West when the allegations surfaced in July). The complaint filed Thursday involves a different firm, the DC-based Americans Direction Group. The Hodes campaign has denied commissioning push polls and said it was only gathering information.

‘Tis the season for political dirty tricks, so these probably won’t be the only push-polling allegations to surface in the last days before the Nov. 2 midterm election. But less than two weeks before the election, the push-poll embarassment does make Hodes’ campaign look a little desperate. Hodes has consistently trailed in the polls since he announced he was running, and forecaster Nate Silver now gives him just a 7 percent chance of beating GOP nominee Kelly Ayotte, a former state attorney general. So even the best push polls probably won’t be enough to save Hodes.  But the fact that he’d employ the Mountain West Research Center (or someone who would subcontract with them) doesn’t speak that well of his campaign. Here’s why:

According to the Idaho secretary of state’s office, the manager of Mountain West is David Haynes, who also happens to be the CEO of a Utah-based polling firm called Western Wats. That firm has been tied to push polling for more than a decade, starting at least as early as the 1996 presidential campaign, when Bob Dole admitted using the firm to push poll against Steve Forbes in Iowa during the GOP presidential primary. (The calls told voters that Forbes was not pro-life.)

Since then, Western Wats and the Mountain West Research Center have popped up regularly during competitive election seasons—frequently in conjunction with push-poll allegations. In 2006, democratic Senate candidate Ned Lamont’s campaign reported that supporters had gotten push-polled by Mountain West during his primary challenge against Democrat Joe Lieberman. Western Wats also surfaced in the Vermont Senate campaign that year, tied to negative calls against the Senate’s only bona fide socialist, Bernie Sanders. But Western Wats really made news in 2008, when it was identified as the firm behind calls to voters in New Hampshire suggesting that Mitt Romney had dodged the Vietnam draft by serving as a Mormon missionary in France. The campaign behind those calls was never identified, though Rudy Giuliani was the leading suspect. (Ayotte, as attorney general, was charged with investigating the allegations.)

That’s not all: some of those calls in previous years may have been made by underpaid children. In April, Western Wats settled a complaint with the US Department of Labor for serious violations of child labor laws. It agreed to pay more than $500,000 for reportedly employing more than 1,400 kids under 16 (some as young as 13) to staff its call centers. Many of the kids were paid less than minimum wage. Naturally, Western Wats dismissed the complaint as mostly full of “technical” violations, but the civil penalty was among the largest ever assessed by the Department of Labor for child labor violations.

None of this should have been a big secret to the campaign geniuses working for Hodes. But the campaign has claimed ignorance. His communications director Mark Bergman said in an email that the campaign did not engage Mountain West, but that one of its vendors had. Bergman says campaign staff was unaware of the connection “until we found they had not followed applicable New Hampshire law in July in conducting survey market research” and says the firm was let go immediately after. (By email, I asked Bergman whether the person or firm that hired Mountain West was also fired; he didn’t respond.)

Of course, candidates (except maybe Bob Dole) never admit to having hired Western Wats or its related firm. The companies’ names rarely show up on campaign disclosure forms because they are subcontracted through political consulting firms. Such an arrangement allows for plausible deniability should someone start complaining about dubious political phone calls. But it’s especially curious that Hodes’ campaign “vendors” chose to get down in the mud with such folks when Hodes is so likely to lose anyway. Far better, it seems, to lose gracefully than be forever listed in the annals of political dirty tricks.