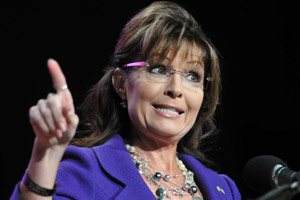 Sarah Palin is standing by her “death panels.”

In an interview taped last week for Newsmax.com, a conservative website, the former Alaska governor and 2008 GOP vice presidential candidate said that she had been right in 2009 to accuse President Barack Obama of trying to set up “death panels” with his health care overhaul. But the legislation, according to PolitiFact.com, did no such thing. In fact, when Palin first made this charge, PolitiFact called it a “pants on fire” lie.

Palin, though, is utterly unrepentant. She boasted to Newsmax:

I was about laughed out of town for bringing to light what I called death panels because there’s going to be faceless bureaucrats who will based on cost analysis and some subjective ideas on somebody’s level of  productivity in life—somebody is going to call the shots as to whether your loved one will be able to receive healthcare or not: to me, death panels. I call it like I saw it, and people didn’t like it.

The problem: what she saw was not there.

In the Newsmax interview, Palin echoes, almost word-for-word, her original accusation. In August 2009, she posted a Facebook note that decried the health care reform proposal:

And who will suffer the most when they ration care? The sick, the elderly, and the disabled, of course. The America I know and love is not one in which my parents or my baby with Down Syndrome will have to stand in front of Obama’s ‘death panel’ so his bureaucrats can decide, based on a subjective judgment of their ‘level of productivity in society,’ whether they are worthy of health care. Such a system is downright evil.

We agree with Palin that such a system would be evil. But it’s definitely not what President Barack Obama or any other Democrat has proposed.

We have read all 1,000-plus pages of the Democratic bill and examined versions in various committees. There is no panel in any version of the health care bills in Congress that judges a person’s “level of productivity in society” to determine whether they are “worthy” of health care.

Palin’s claim sounds a little like another statement making the rounds, which says that health care reform would mandate counseling for seniors on how to end their lives sooner. We rated this claim Pants on Fire! The truth is that the health bill allows Medicare, for the first time, to pay for doctors’ appointments for patients to discuss living wills and other end-of-life issues with their physicians. These types of appointments are completely optional, and AARP supports the measure.

In other words, no “death panels” and nothing like “death panels.” Factcheck.org also pronounced Palin wrong on this.

In the past year, Palin has offered no proof to back up her “death panels” charge. Yet now she’s not only doubling down on “death panels”; she’s bragging about her gutsiness in calling out Obama. It’s as if she never was refuted—or refudiated.

As for the possibility of a 2012 presidential run, Palin told Newsmax,

Anyone is foolish to prematurely close any door that perhaps will be be open for them. I also know that really it isn’t my call. It is the people of America—whether they would be ready for someone a bit unconventioal, out of the box…or if they want someone a little bit more conventional, maybe more electable.

Was Palin really suggesting she’s not that electable? In any event, she did not say if she expected “death panels” to be an issue in the 2012 campaign.