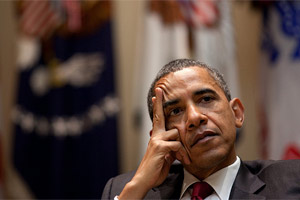 With a little over two weeks to go to the critical elections, why would the Obama White House want reporters (and voters) to fixate on what it got wrong in its first two years?

That’s the question prompted by the appearance this week of a made-for-cable-chatter New York Times Magazine story (posted on the newspaper’s website on Wednesday, ahead of the Sunday hard-copy delivery) by Peter Baker titled “Education of a President.” For this article, the White House granted Baker, one of the newspaper’s White House correspondents, an interview with Obama and on-the-record access to the president’s top aides. Baker also coaxed other Obama advisers to talk on background. The takeaway from the piece—accompanied by the standard president-walking-alone photograph—is a presidential quasi-mea culpa.

Obama and his crew stand by their policy achievements—the stimulus, the health care overhaul, Wall Street reform—but they concede that they have screwed up the political calculus. “Given how much stuff was coming at us,” Obama told Baker, “we probably spent much more time trying to get the policy right than trying to get the politics right.” Obama explained: “I think anybody who’s occupied this office has to remember that success is determined by an intersection in policy and politics and that you can’t be neglecting of marketing and PR and public opinion.” The president also noted that he allowed his political foes to identify him as “the same old tax-and-spend liberal Democrat.” Baker describes Obama’s “self-diagnosis” this way: “[T]he figure of inspiration from 2008 neglected the inspiration after his election. He didn’t stay connected to the people who put him in office in the first place.”

Progressives who have long griped about the administration’s failure to keep Obama’s 13 million campaign foot-soldiers engaged after the inauguration can now claim, “I told you so.” But more importantly, the White House with this article (well executed by Baker) has demonstrated a sense of lousy political timing. There are not many days left before voters hit the polls for the critical midterm elections. Now is not the moment for a high-profile “We blew the politics” admission. The White House ought to be in full attack mode. Yet this intriguing tale of presidential second-thoughts, made possible by White House cooperation, is ready-made for endless regurgitation within the media. (Case in point: this article.)

The fallout from the Times story will compete with the message the Democrats truly need to hammer home in the next 19 days: A Republican takeover of the House and/or Senate will mark a triumph for the wealthy and such special interests as Big Oil and Big Finance. At this point, Democratic congressional candidates will not be aided by Obama acknowledging the obvious: “We neglected politics.” The president could have waited a few weeks before conceding his miscalculations to the New York Times. There will be plenty of time after Election Day for such declarations.

Baker’s lengthy article does show the administration reaffirming much of the criticism it has faced (and often rejected). “White House officials,” he writes, “largely agree they should not have let the health care process drag out while waiting for Republican support that would never come.” Oddly, though, the article suggests that the president hasn’t fully taken to heart a key lesson.

In the piece, Obama aides note that the president and his team underestimated Republican rejectionism. “Perhaps we were naive,” White House adviser David Axelrod remarked to Baker. “First, [the president’s] always had good relations across party lines. And secondly, I think he believed that in the midst of a crisis you could find partners on the other side of the aisle to help deal with it. I don’t think anyone here expected the degree of partisanship that we confronted.” Recently departed White House chief of staff Rahm Emanuel said, “Part of what [the Republicans] were doing was not just making us grind it out. They were souring the country on the mood of the country.”

Obama noted that it was probably a mistake to incorporate Republican-style tax cuts into the stimulus to win over GOPers and that he should have let the Republicans push for such tax cuts, so he could then score political points by accepting them as a bipartisan compromise. In other words, he couldn’t deal straight with Republicans because they were not straight shooters. Give them a good-faith compromise at the start, and they’ll hit you with a two-by-four.

Some Democrats and progressives have been saying from the start that Obama had failed to recognize this fundamental fact of life. But even as the president and his aides indicate to Baker they’ve learned this simple lesson the hard way, Obama also signals that…maybe he hasn’t.

Obama told Baker that he’s optimistic he could find common cause with Republicans after the elections: “It may be that regardless of what happens after this election, they feel more responsible, either because they didn’t do as well as they anticipated, and so the strategy of just saying no to everything and sitting on the sidelines and throwing bombes didn’t work for them, or they did reasonably well, in which case the American people are going to be looking to them to offer serious proposals and work with me in a serious way.”

Or maybe not. A tea partyized GOP that has striven to block Obama’s key initiatives and catered to corporate interests is not likely to change its inclinations once the votes are counted on November 2. The tea party influence is likely to be stronger, and that means the impulse to obstruct will be more intense.

When Bill Clinton was president, he was fond of saying that one definition of insanity is doing the same thing over and over and expecting different results. Even though Obama and his aides acknowledge that they misjudged the Republicans, the president still asserts that he can reasonably work with a band of politicians who have misrepresented his policies and aligned themselves with interests that oppose the public good.

Obama’s Democratic allies are busy these days battling for their political lives. And the republic could end up with eager-to-obstruct far-right Republicans Sharron Angle, Joe Miller, and Rand Paul in the Senate, ready to blow up that chamber to stop Obama. This is not when he should publicly engage in self-reflection. He needs to be swinging at the opposition, not wringing his hands. But if the president has picked this period for a rearview mirror review, he ought to at least absorb the appropriate lesson—and fight accordingly.