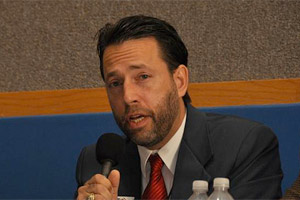 Joe Miller, the Sarah Palin-endorsed, tea party-backed GOP Senate candidate in Alaska, hasn’t campaigned much on his opposition to gay rights. In a July letter to Alaskan voters, he noted that “the traditional Christian view” is that “homosexuality is a sin, and therefore immoral.” He added, though, that the “central issue of the campaign” has been the federal debt and government spending. But Miller did place on his campaign payroll a self-described “Christian educator” who leads a religious right organization so virulently anti-gay that it denounced Rush Limbaugh for hobnobbing with Elton John.

According to Miller’s campaign disclosure forms, Miller has paid Terry Moffitt of High Point, North Carolina, $2500 for consulting services. Moffitt is not known as a political consultant. But he is a man of many interests. He’s been a dean at a Christian high school (where he taught creationism), and he has traveled around the world to promote Christianity. (He refers to himself as the “Christian Indiana Jones.”) He also owns a security business, and the firm’s website says Moffitt is able “to provide security consultation services, perform technical threat assessments, and design pre-emptive security measures” for education and nonprofit organizations. His personal website notes he “had a contract put on his head by organized crime, received death threats from radial [sic] Islamic groups and been bitten by a very nasty spider in Australia.” On top of all this, Moffitt is the chairman of the Family Policy Network, a group that passionately opposes homosexuality.

Moffitt’s Family Policy Network runs a project called “Hope for Homosexuals”  that encourages “practicing homosexuals to ‘come out’ of that destructive lifestyle, and to ‘come home’ to the love and forgiveness of Jesus Christ…While the homosexuals celebrate their perversions, they are confronted with the truth that there is hope for deliverance in Jesus Christ.” In June, the group hired an airplane to fly a banner near Disney World during a gay outreach day that read “Jesus Christ: WWW.HOPEFORHOMOSEXUALS.COM.” It has flown this banner in other spots where there might be a collection of gays and lesbians. In 2003, the group sued the Federal Aviation Administration to challenge the no-fly zone over Disney World and lost. (Another Family Policy Network project is placing the motto “In God We Trust” in “as many public buildings as possible.”)

The group’s guiding principles, according to its website, include opposition to all fornication and homosexuality. It denounces “any efforts to convince society that homosexual behavior or ‘being gay’ is somehow normal or natural.” The organization explains its antipathy to homosexuality “is the result of a healthy fear of God’s judgment that will otherwise be wrought on individuals who reject God’s laws and our our nation for turning a blind eye.” That puts the Family Policy Network in the extreme camp of anti-gay activists—those who believe that God could punish the United States collectively, if Americans tolerate homosexuality. (This is reminiscent of when Jerry Falwell and Pat Robertson partly blamed gay rights activists for the 9/11 attack.)

Moffitt’s Family Policy Network has not hesitated to attack conservatives whose opposition to gay rights it deems insufficient. Its blog blasted Limbaugh for hiring Elton John to perform at his wedding: “Limbaugh scorns the Word of God with his friendly association with an unrepentant homosexual who is hostile to the Lord Jesus.” The group slammed Glenn Beck because his “supposed conservatism is really a man-centered libertarianism.” Beck’s sin? Telling fellow Fox News host Bill O’Reilly that gay marriage is not a big deal and that conservatives should be engaged in other battles. The group’s blog huffed, “Beck would condemn future generations of young impressionable children to homes wherein God is mocked and sexuality is perverted just because he thinks it won’t affect his own safety or fiscal security.”

In 2000, the group criticized Republican George Allen when he was running for the Senate in Virginia for meeting with pro-gay rights Republicans: “George Allen betrayed every pro-family conservative in Virginia by meeting with homosexual activists. For George Allen to meet with any group that defines itself by deviant, destructive sexual behavior is totally unacceptable.” It protested when the University of North Carolina required incoming freshmen in 2002 to read a book about the Koran and when the University of Maryland distributed to entering freshmen a play about the murder of Matthew Shepard, a young gay man in Wyoming. The Family Policy Network also staunchly opposes abortion, contraception, and in vitro fertilization. The group’s goal, it says, is to champion “a Biblical perspective” on social issues.

In addition to being chairman of the Family Policy Network, Moffit has been involved with other religious right outfits. He has been a member of the Council for National Policy, a collection of leading social conservatives, and he worked on Alan Keyes’ 1996 presidential campaign. This year, he noted his disappointment that Christian political outfits at first eschewed Miller, who was considered a longshot in his primary campaign against Republican Sen. Lisa Murkowski. (Having lost the GOP senatorial nomination to Miller, Murkowski is now running as a write-in candidate in what appears to be a close three-person race, including Democratic candidate Scott McAdams.) After Miller won the primary, Moffitt complained,

In other words, these other Christian conservatives are opportunistic. But not Moffitt. He represents the die-hard religious right.

So how has he been assisting Miller? The Miller disclosure forms do not specify what consulting services Moffitt has provided to the campaign. Neither the Miller campaign nor Moffitt responded to requests for an explanation.