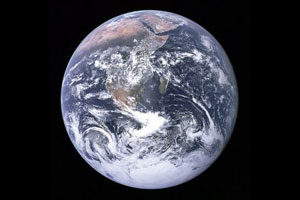 The discovery of the planet Gliese 581g (Zarmina)—a perhaps semi-habitable planet orbiting Gliese, a star 20 light-years away—was met with much rejoicing in the sci-fi nerd community when it was announced in late September. If you watched the mainstream media coverage, you’d think that we’d finally discovered a backup Earth—a planet that’s relatively close that we could maybe colonize at some point in the future. Unfortunately, that’s almost certainly not the case. Even if you got around some non-minor problems—the planet is tidally locked, with one side in permanent light (and heat) and the other in permanent darkness (and cold)—it would take a very long time to get there. Like, many lifetimes long. David McConville, a scientist who works with a space technology company, made a video about just how long it would take, and why the sci-fi myth that we have “backup Earths” and second chances is so pernicious:

Dave Goldberg of the User’s Guide to the Universe is a lot more optimistic about advances in space travel. But his calculations include all sorts of ridiculous assumptions—the example of a sci-fi-style matter-antimatter drive, for example, to power the spacecraft. And even then, the fuel needed to power the trip would require an amount of energy that would take “3 million years to collect on earth if the entire surface were covered with solar panels.” Basically, you’re not going to Gliese 581g. We’ve got to take care of the planet we have. As Crosby, Stills, and Nash wisely said, “Love the One You’re With“: