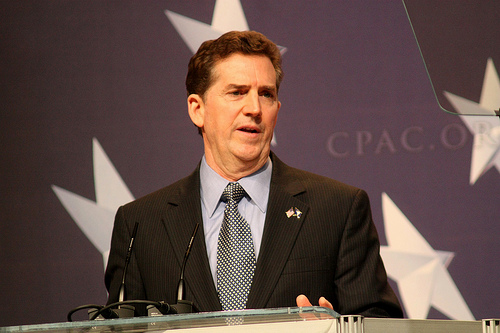 It’s hard to detach some right-wingers’ concerns about gay rights or women’s rights from their concerns about extramarital sex in general. Witness the recent comments of Sen. Jim DeMint (R-S.C.) on whether gays, lesbians, and unmarried women should be allowed to teach kids:

Speaking to the “Greater Freedom Rally” on Saturday at a church in Spartanburg, SC, DeMint actually advocated for fewer basic freedoms for gays and unmarried women. According the Spartanburg Herald-Journal, DeMint “said if someone is openly homosexual, they shouldn’t be teaching in the classroom and he holds the same position on an unmarried woman who’s sleeping with her boyfriend—she shouldn’t be in the classroom.”

When this quote first came out, our Washington bureau chief, David Corn, emailed me to ask whether DeMint “really said this.” David couldn’t believe it—even of DeMint, perhaps the most conservative Senator in a very conservative GOP caucus. It’s really that shocking. There’s so much that’s awful about this, but I especially love how DeMint’s comments about restricting people’s freedom to apply for the jobs they want came at a “Greater Freedom Rally.”

Women’s groups and Dems are pushing hard on these comments, pointing out that DeMint has handed out campaign cash to conservative candidates across the country. DeMint’s comments are outrageous enough that they might encourage people who wouldn’t otherwise vote to get to the polls. They’ll also presumably help the DNC raise some money. But they probably won’t change many people’s votes—unmarried women, gays, and lesbians are already a pretty Democratic demographic. DeMint won’t really pay. The GOP will still have a great November, and he’ll still win overwhelmingly. What a jerk.