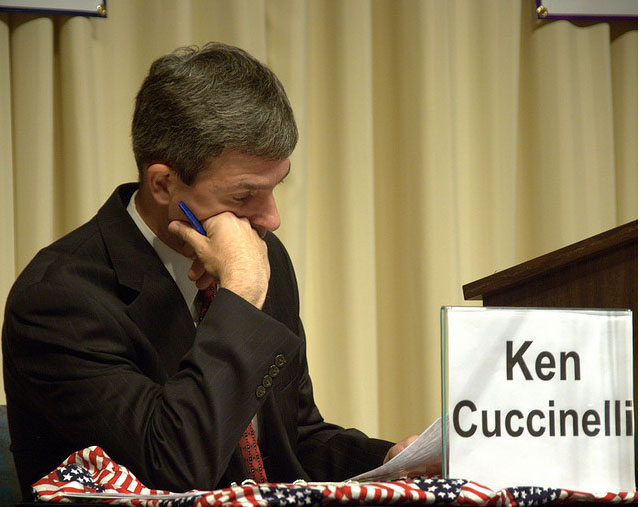 Ken Cuccinelli, Virginia’s crusading right-wing attorney general, is taking another shot in his war on climate science. On Monday, he issued a another subpoena of documents from the University of Virginia’s climate science program. This comes after a judge rejected his last attempt to force the university to turn over documents.

Cuccinelli is seeking the records of Michael Mann, a climate scientist now at Pennsylvania State University. Mann is best known for the so-called “hockey stick” graph illustrating the uptick in global temperatures over the last century, which skeptics have launched numerous attacks on since it was first published more than a decade ago. The furor was stirred again last fall when hackers stole and released a number of emails between climate scientists that those who question whether the planet is warming spun as evidence of a conspiracy. Cuccinelli took the so-called “ClimateGate” controversy as an opportunity to harass Mann and attempt to prove that he committed “fraud” in his work on climate change.

“The Cooch” has tried to obtain the documents under the Virginia Fraud Against Taxpayers Act, but judge rejected his first subpoena in August, finding no evidence to back up his claim that Mann committeed fraud. Cuccinelli’s new subpoena narrows the scope of the documents he’s requesting to only those related to one $214,700 state grant to fund a 2003 climate study. Cuccinelli claims that Mann “mislead the granter” by basing his application on flawed studies, and that UVa. has documents that his office needs to investigate that assertion. He also expands his reasoning for the request, arguing that two of Mann’s papers on global warming “have come under significant criticism” and that Mann knowingly included “false information, unsubstantiated claims and/or were otherwise misleading” in his publications.

“Specifically, but without limitation, some of the conclusions of the papers demonstrate a complete lack of rigor regarding the statistical analysis of the alleged data, meaning that the result reported lacked statistical significance without a specific statement to that effect,” the civil investigative demand from the AG’s office states.

Of course, one might wonder what part of Cuccinelli’s resume qualifies him to evalute the rigor of Mann’s climate work. That aside, it also neglects to mention that multiple investigations into the so-called “ClimateGate” controversy found no evidence of any wrongdoing on Mann’s part and the science has repeatedly been affirmed in other studies. UVa. has until Oct. 29 to decide whether to produce the requested documents or fight this subpoena as well.

Of course, this isn’t really about Mann; it’s about the bigger goal of undermining climate science and instilling fear in scientists. Francesca Grifo, senior scientist and director of the Union of Concerned Scientists’ Scientific Integrity Program, said Cuccinelli is “flagrantly abusing his power” for political gain. “The attorney general continues to harass Michael Mann and other climate scientists simply because their results don’t fit with his political views,” said Grifo, adding that the main goal is perpetuating public doubt and confusion on the subject. (UCS also has a timeline of events in Cuccinelli’s crusade against Mann.)

Mann himself gave a statement to the Washington Post criticizing the latest subpoena:

“I find it extremely disturbing that Mr. Cuccinelli has sought to continue to abuse his power as the attorney general of Virginia in this way, in the process smearing the University of Virginia and me and other climate scientists,” Mann said. “The people of Virginia need to be extremely disturbed that he is using their tax dollars to pursue this partisan witch hunt.”