If you’re trying to make sense of the $2 billion being spent in anticipation of next Tuesday’s election, here’s a few nifty tools. Maplight.org and Wired have teamed up to create the Influence Tracker, which compiles the latest data on members of Congress’ haul during this election cycle as well as their biggest donors. Nice touch: logos of each member’s top corporate sponsors. 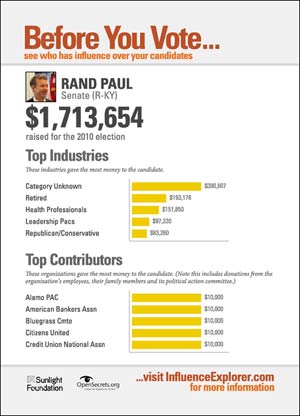 nlight Foundation’s Influence Explorer app creates similar snapshots of canddiates’ war chests, but includes challengers who aren’t currently members of Congress. Nice 20th-century touch: For $2, you can mail a copy of the data directly to friends and family in postcard form.

And if you’re curious who’s behind the flood of post Citizens United spending, check out NPR’s org chart showing the “independent grassroots groups” helping Republican candidates and their links to each other and the RNC. (Plus: Watch this video of MoJo reporters tracking down these shadowy organizations on their own turf.) 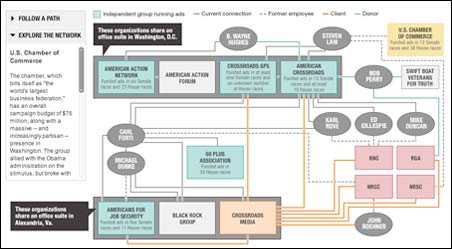 For even more data on the influence of money, corporations, and interest groups in the 2010 election, see our recent package, Who Owns Congress? Come across more cool election tracking tools? Mention them in the comments.