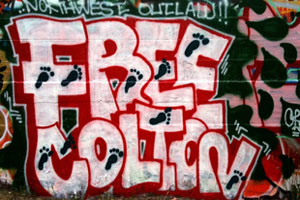 For the first summer in half a decade, Kara Webber didn’t have to worry about Colton Harris-Moore crashing a stolen car into the propane tank behind the convenience store she works at. Or emptying out the ATM after-hours with a debit card he’d filched from a neighbor. Or breaking into her home for a quick bite to eat—while she was in the living room. And that, on balance, is a good thing: “He’s locked up; we’re happy,” she says.

Kara explains to me how Colton used to break into her store late at night, then she takes a deep breath: “I mean, kid’s an idiot.”

Well, sort of. By now you’ve probably heard about the escapades of Colton, aka “The Barefoot Burglar,” aka “the kid who stole all those planes.” Raised by his mother in a trailer on Camano, a wooded island about an hour north of Seattle, he graduated from petty theft, to swiping cars, to, eventually and most dramatically, stealing and crash-landing private airplanes. Note the plural. Colton did this five times, at least, the last of which brought him to the Bahamas this summer, and from there, to a federal holding facility outside Seattle.

“I will say this: I think he could be really talented,” Kara says. “I think he’s smart, and had he chosen a different path—I don’t think he knows any fear.” She launches into a story about the time Colton broke into a neighbor’s house to use the hot tub, while the family was still home. “He’s not stupid, there’s just no direction.”

Colton’s youth, affection for other people’s property, and bravado (he would occasionally, for instance, leave notes or outline two bare feet in chalk at the scene of a heist) have made him, to some people, a modern-day folk hero—some combination of Jesse James and Huckleberry Finn. You can, for instance, purchase a “Fly, Colton, Fly” t-shirt for $20 (or go with the self-portrait version here, or the “Viva Colton,” or the “Wanted” print, or, if you need to be absolutely on top of the news cycle, “Free Colton.” Or just check out the Facebook fan page, or listen to the tribute song.

Kara, for one, wants none of it.

“He stole from the rich, but he never gave to the poor.”

A few years back, for instance, Colton stole a car from an island resident on vacation in Colorado and, while being pursued by a sheriff’s deputy, bailed out of the car, leaving it to plow into a dumpster behind the store. It came dangerously close to rupturing the building’s propane tank.

“It was a Mercedes! It’s not some piece of junk!” Kara says.

At one point, things got so desperate on Camano Island—and so desperate were islanders to counteract the Colton-as-folk-hero narrative—that locals composed an anti-Colton bluegrass song (“Colton Moore look around/ There’s a storm coming down/ The likes of which you ain’t ever known/ Forget the movie rights and the fame and the lights/ They’re gonna put you underneath a stone”) and began selling anti-Colton merchandise to raise money for a bounty hunter.

“A lot of men were saying ‘I hope he comes to my house because I got a gun and I can take care of him,'” Kara says.

Now that Colton’s in federal custody, you can at least entertain the notion that he’ll be converted, xXx-style, into some sort of CIA super-agent, capable of breaking, entering, and decapitating all systems, like STUXNET only with a soft-spot for candy bars and animals. Or that he’ll just bust out (like he did previously, from a juvenile detention center). Or maybe both.*

“That’s exactly what he was: brazen. You better not turn your back on him. You better have him shackled. Because if you give him the chance, he’ll run. I think he would!”