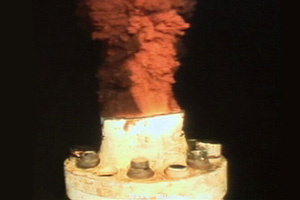 Initial government estimates about the size of the Gulf oil spill were low—way, way low. The number the government repeated for four weeks, about 5,000 barrels per day, was about one-twelfth of the actual rate oil was seeping from the well. So what went wrong with the government’s math? It’s an awfully good question, one that watchdog groups want answered. Public Employees for Environmental Responsibility (PEER), which represents whistleblower scientists at government agencies, announced Thursday that it is filing suit against the Obama administration to gain access to the paper trail on the government’s early assessments. The group says government officials are “hiding the memos and e-mails behind official scientific assessments of the size of the massive BP oil spill in the Gulf of Mexico.”

At the height of the spill, 62,000 barrels of oil gushed from the hole daily, the federal government flow rate team concluded in August. That’s a far cry from BP’s first estimate—1,000 barrels—and from the government’s first initial estimate of just 5,000 barrels per day. They later increased the official estimate to 12,000 to 19,000 at the end of May.

Yet as I reported shortly after that range was released, the actual documentation that the US Geological Survey, a division of the Department of Interior, released a week later made it clear that even this rate was a low-end estimate. But Marcia McNutt, the director of the USGS and chair of the Flow Rate Technical Group, told reporters that this was the best estimate available at the time.

PEER says the administration is violating the Freedom of Information Act by not releasing the requested documentation, which includes the technical data supporting the estimates about the spill size, directives from agency heads, and correspondence between officials and scientists.

PEER alleges that McNutt “omitted the fact that these were minimum estimates (deleting phrases such as ‘at least’ and ‘range of lower bounds’) and did not mention completed estimates that were much higher.” The group also alleges that the government “withheld the actual technical report and instead released only a summary that [McNutt] wrote” and “directed that none of the Technical Group documents was subject to the Freedom of Information Act (FOIA) and that group members should not disclose any materials.”

A number of groups, including Citizens for Responsibility and Ethics in Washington (CREW), Greenpeace, and the Center for Biological Diversity have sought the technical documents and correspondence related to the flow rate, to no avail. While some related documents are posted on the USGS site, Jeff Ruch, executive director of PEER, says the government has been “stalling us for the last couple months” on specific documents and is just posting “filler” online. “We’re looking for information about what was shared with the public, what wasn’t, and why,” said Ruch.

The government has also faced criticism for claiming that three-quarters of the oil in the Gulf was “gone” in early August. The National Oceanic and Atmospheric Administration has come under fire for refusing to release the data on which those claims were based. (The agency later said that the documentation for the claims would not be available for months.) And the supposed independent experts who peer-reviewed NOAA’S report? They say they never saw the final document before it was released.

The continued lack of transparency about how much oil was spilled, where it went, and what the government knew about both those figures over the course of the disaster has alarmed a number of environmental advocates. “There is no scientifically, peer-reviewed data or studies on how much oil was spilled or how much oil is left,” said Bill Snape, senior counsel at the Center for Biological Diversity. “We still have no idea. We’re guessing.”