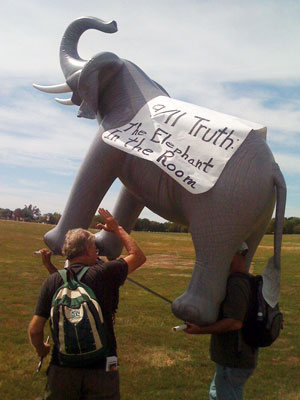 Schedule a tea party on the grounds of the Washington Monument on the anniversary of 9/11 and you’re likely to get a few counter-protesters or people with nutty signs. But while tea partiers seem to have high tolerance for say, LaRouchies and birthers, they don’t seem to have much patience with truthers, conspiracy theorists who think that the attacks on the World Trade Center and Pentagon on 9/11 might have been orchestrated by the Bush administration. A bunch of them decided to show up Saturday carrying a giant elephant and a big sign claiming “it wasn’t Muslims!” They marched through the back end of the rally sponsored by Unite in Action, an umbrella group of tea party and other “patriot” organizations, and immediately caught the attention of some of the yellow-shirted volunteers policing the rally perimeter. They asked the truthers to leave, there was a confrontation, and eventually US Park Police shooed the truthers off to another part of the monument grounds.

Not everyone at the rally saw the need to throw out the truthers. David Newman-Stump was with a group of guys waving enormous “Sons of Liberty” flags who were right in the middle of the confrontation. Initially, I thought they were from the biker club, Sons of Liberty Riders, that usually shows up for these protests, but these Sons of Liberty, while associated with the riders, were actually a metal band that had played DC’s 9:30 Club Friday night. They came to the defense of the truthers because, “That’s exactly the kind of tyranny we’re trying to fight,” explained Newman-Stump. “They have a constitutional right to speak.” But the Sons lost that battle to the big, burly volunteers from Unite in Action, who made a pretty menacing effort to keep the truthers out. I later saw one of the volunteers oust another guy wearing a “9/11=Inside Job” T-shirt. He was standing peacefully in the crowd and wasn’t bothering anyone, but apparently the tea partiers’ devotion to First Amendment rights for conspiracy theorists is a little selective.