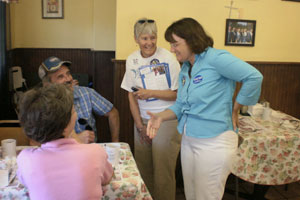 Some liberals are celebrating the victory of Christine O’Donnell in Delaware’s GOP Senate primary, hoping that her candidacy will hand the seat to Democratic candidate Chris Coons. But elsewhere, progressives have a primary victory of their own to cheer. In the Democratic primary to replace Rep. Paul Hodes in New Hampshire’s second congressional district (Hodes is running for the Senate), liberal-backed Ann McLane Kuster clobbered more conservative Katrina Swett. (Swett committed the ultimate crime in progressive-land: she was the co-chair of Joe Lieberman’s presidential campaign.) Kuster was backed by major pro-choice groups, who worried that Swett could not be trusted on abortion rights issues. That mattered. But the race was also a chance for liberals to flex their political muscles.

Kuster was supported by all the big progressive activist groups—especially Howard Dean’s Democracy for America (DFA) and the Progressive Change* Campaign Committee (PCCC). I recently spoke to PCCC’s Adam Green about the race. He said Kuster’s win showed “maturity” in the progressive movement’s ability to affect primaries. “A few years ago blogs would raise small amounts of money for candidates but not really have an ongoing relationship with their campaign,” Green said. “But now we’re at a point where we’re helping campaigns find staffing, run cutting edge online campaigns, and also raise a ton of money online from lots of people.” There’s no doubt PCCC had an impact on the race: it mobilized its 2,800 New Hampshire members to assist her campaign, it helped her find her communications director, and it raised around $100,000—real money in a primary contest—for Kuster. The candidate called the organization a “real partner.”

The real question, of course, is whether any of these progressive candidates can win in November. Swett attacked Kuster during a debate as unelectable and too progressive. She’ll certainly have a hard race against former Rep. Charlie Bass—if he can survive a tough primary race of his own. (Swett would have had trouble with Bass, too.) But Green, unsurprisingly, thinks his group picked the right horse. “A lot of people have been saying Democratic voters don’t vote for a progressive candidate because they can’t win,” he says. “We want to prove that wrong in 2010.” He sure picked some year to test that proposition.

UPDATE: Reshma Saujani, who ran a Wall Street-backed campaign challenging incumbent New York Rep. Carolyn Maloney from the right, lost badly on Tuesday night. That should probably count as another victory for liberals.

*This originally said Congressional. That was wrong. Sorry.