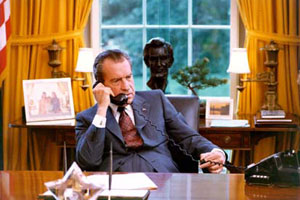 A candid photo of President Richard Nixon at his desk in the Oval Office on June 23, 1972. | <a href="http://www.nixonlibrary.gov/virtuallibrary/gallery12.php">Richard Nixon Presidential Library</a>.

A dying journalist. He has one final assignment: Find out if President Richard Nixon ordered him assassinated.

That’s what occurred at the end of the life of the infamous columnist Jack Anderson, one of the most influential Washington reporters of the 1950s, ’60s, and ’70s. This intriguing and poignant tale is recounted by Mark Feldstein, a former investigative correspondent for CNN and ABC (and onetime Anderson intern) in his marvelous new book, Poisoning the Press: Richard Nixon, Jack Anderson, and the Rise of Washington’s Scandal Culture.

First, some background: After writing for the military newspaper Stars and Stripes during World War II, Anderson hit Washington, DC, and eventually became a “legman” for Drew Pearson, whose muckraking “Washington Merry-Go-Round” column was carried by more newspapers than any other column at the time. Over the course of the next three decades, Richard Nixon would be a constant target of the column as he rose from House member to senator to vice president to president. (Pearson and Anderson’s discovery of a Nixon slush fund in 1952 led to Nixon’s famous “Checkers” speech.)

They subsequently reported that Nixon intervened with federal officials to help a millionaire Romanian exile obtain a large tax break. (They did not report the tip that Nixon had pocketed: a $100,000 campaign contribution from this fellow.) In 1956, the column noted that Nixon had used a Los Angeles gangster to collect campaign contributions “from the underworld.” Days before the 1960 election, Pearson and Anderson dropped a bomb on presidential candidate Nixon: Industrialist Howard Hughes had given a secret loan of $205,000 to Nixon’s brother, and Nixon was in on it. Nixon lost the election by a hair. He and his aides believed the loan controversy was partly to blame.

Eight years later, when Nixon was again the GOP’s presidential nominee, Anderson and Pearson revived their previous stories and reported more details about Nixon’s earlier efforts to bag campaign money from gangsters. The pair also came close to reporting that Nixon had previously been treated by a New York City psychotherapist—a story that could have ruined him, given popular prejudice at the time against such treatment. They had the story confirmed, but Pearson killed it at the last minute. Then days after the election, Pearson in a speech at the National Press Club revealed that Nixon had sought this treatment and that the psychotherapist had expressed concern about Nixon’s ability to contend with “great pressure.”

During the Nixon years, Anderson pursued the president like Ahab after the great whale. (Pearson died in September 1969.) He regularly published scoops based on leaked documents showing Nixon administration deception regarding US actions in Vietnam. He revealed that the White House was secretly assisting the military dictatorship of Pakistan during the India-Pakistan war. He took a cheap shot at Vice President Spiro Agnew with a column hinting that Agnew’s son was gay. In public, Anderson bragged that he regularly was leaked copies of Nixon’s private memos and minutes of confidential White House meetings. He broke the story of Nixon’s secret meeting with Elvis Presley (who asked the president to sign him up as a narcotics agent). Nixon and his aides despised Anderson and repeatedly railed against him. The president yearned to prosecute “that bastard.” His aides discussed blackmailing the columnist. The White House even sicced the CIA on Anderson—to no avail.

Then in 1972, Anderson unearthed a blockbuster story: a memo written by a lobbyist proving that Nixon had intervened in a giant antitrust case involving ITT, a telecommunications conglomerate, in exchange for ITT donating $400,000 to his re-election campaign. Another Nixon scandal erupted. In the middle of the hullabaloo, Charles Colson, a top White House aide (who in his current bio refers to himself as Nixon’s “hatchet man”), met with E. Howard Hunt, a former CIA officer who had become a Nixon dirty trickster, working as part of the secret “Plumbers” unit that would soon be caught breaking into the Watergate. According to Hunt, Colson told him that Nixon was enraged by Anderson and that the reporter had to be killed in what should look like an accident.

To pull off this job, Colson recruited G. Gordon Liddy, who had recently joined the Nixon campaign as an operative. As Hunt and Liddy have acknowledged, the two trailed Anderson. They sought advice from a CIA physician who had been involved in the agency’s efforts to assassinate Fidel Castro. The duo considered various plots: placing poison in medicine Anderson was taking, placing LSD on the steering wheel of Anderson’s car (in the hope he would start tripping and crash his vehicle), staging a fake mugging in which Anderson would be fatally knifed. But before any plan was hatched, according to Hunt, Colson told him to call off the hit.

As Feldstein notes in his book, some Nixon aides have questioned whether the murder plot occurred—despite the fact that Hunt and Liddy in later years publicly discussed it in great detail. Hunt believed that the order to kill Anderson came directly from the president. Colson, who after serving prison time for a Watergate-related charge founded Prison Fellowship Ministries, has always claimed that he and Nixon had nothing to do with this lethal conspiracy.

But Anderson never believed Colson’s denial. Shortly before he died in 2005, while hospitalized for Parkinson’s disease, Anderson took a stab at nailing this story—and Nixon. As Feldstein writes:

The newsman passed word to Colson that he was dying and asked him to call out of Christian compassion. Colson did. “I told him I’d been at the hospital and was having a hard time,’ Anderson said, and that “no recovery was possible.” The two men exchanged pleasantries and flattery, and talked about old times. Anderson had once offered to loan Colson money before he went to prison, and Colson remembered the gesture with gratitude.

Eventually, Anderson nudged the conversation toward the murder plot. “What really happened?” he asked Colson. The conversation went from warm to chilly, as Colson issued the standard denial. Anderson assumed Colson, these days a leading Christian conservative, was still lying to protect Nixon. He still believed Nixon had been in on it. But he had failed to win this much sought-after confession. (After Anderson died, Liddy, now a folk hero on the right, sent an email to a former Anderson reporter: “too bad the plumbers didn’t get to that anti american traitor jackoff anderson, good riddance.”)

Feldstein’s work, an absorbing read that details Anderson’s many accomplishments and his many warts, chronicles the modern-day rise of spin and combative politics in the nation’s capital, showing how the dirty politics and media wars of today are linked to those of the Nixon era and, in some cases, perpetuated by once-young Nixonites (paging Roger Ailes). Moreover, the book once again reminds us that at a crucial point in US history—when war was being waged, when the society was divided over fundamental social issues—the man in charge of the government was a venal, dishonest, and essentially psychopathic thug, whether or not he ordered Jack Anderson killed. And that was a story that Anderson spent years exposing.