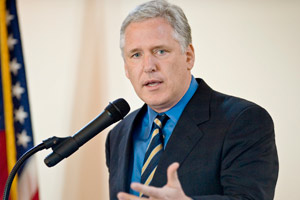 Just about every Republican campaigning this year seems to be running against Nancy Pelosi. The call to “Fire Pelosi!” is so ubiquitous that the Republican National Committee has even launched a cross-country bus tour around the slogan. But there’s only one Republican in the country who’s actually running aginst the Speaker of the House. Meet Pelosi’s challenger, John Dennis, a San Francisco businessman with a libertarian streak so wide that he’s gone to Burning Man, wants to legalize marijuana, and demands an immediate withdrawal from Iraq and Afghanistan.

Smack in the heart of San Francisco, Dennis is making a longshot bid for Pelosi’s seat in California’s 8th District, which encompasses most of the country’s most famous liberal mecca. A self-styled “Ron Paul Republican,” Dennis has wandered out into the no-man’s land between the fringe right and far left, portraying Pelosi as a warmonger who propped up the big banks and failed to push hard enough for gay rights. At a Labor Day antiwar rally, Dennis stood shoulder-to-shoulder with his hero Paul, as well as Matt Gonzalez—the Green Party’s 2008 vice presidential candidate—to call for a kumbaya moment. “It’s time to get beyond the left-and-right fight,” he told the crowd of supporters in downtown San Francisco. “While we fight, Washington’s power expands—and it always expands at the expense of our civil liberties!”

Dennis certainly prides himself on being an iconoclast. “I’m a Republican, and I’ve been to Burning Man,” he says. “The whole thing really touched me, it was amazing to me that people create just for the moment.” Dennis is quick to reassure me that he “didn’t do any drugs” while he was attending the countercultural arts festival—though he supports making pot legal because of free-market principles.

But in a district where John McCain won less than 13 percent of the vote in 2008, the Republican Party has all but written off his bid. “They’ve been supportive…in spirit,” he says with a laugh. Which translates to: “They’re not giving me any money.” But last week, he decided to make a pilgrimage to Washington anyway, to meet with national media and pay his respects to the GOP leadership. He even managed to score a face-to-face with House Minority Leader John Boehner (R-Ohio)—”the one who returned my phone call,” he says. “We just went in to say ‘Hi,’ and chat a little bit, nothing substantial.” The meeting lasted all of five minutes.

Pelosi’s seat is so secure that pollsters typically don’t even bother with the race. The only known poll of a Pelosi-Dennis match-up puts him at just 19 percent, and it was conducted by WorldNetDaily—a fringe publication better known for conspiracy-mongering than electoral prognostication. But Dennis just seems happy to be seeing through his latest “entrepreneurial venture,” as he describes his campaign. The cofounder of an ergonomic furniture design company, Dennis originally made his mark in the business world, and he still dresses the part: better-than-average haircut, crisp blue jacket, khaki pants. But it isn’t long after he sits down that he begins to unload on his opponent for creating a corporate welfare state. “She’s a corporatist,” he thunders. “She supported the bailouts, bailing out GM, the banks, the insurance companies.”

I ask Dennis—whose campaign website describes him as “a successful businessman and entrepreneur”—what the difference is between supporting “corporatism” and being pro-business. He suddenly lights up. “That’s a really great question,” Dennis says, shooting me a conspiratorial look. The secret is this: He’s not actually pro-business. “I’m really more pro-market. Pro-business would lend itself to a kind of corporatism…what I object to is the government picking winners and losers—getting involved in corporations and creating legislation that gives them an advantage over their competitors. “

The anti-business businessman has been forced to reconcile more than a few contradictions during his quixotic campaign. In his bid to attract voters to Pelosi’s left, Dennis has attacked the speaker for not pushing hard enough to repeal anti-gay measures like Defense of Marriage Act and the military’s Don’t Ask Don’t Tell (DADT) policy. “The government shouldn’t be in the marriage business in the first place,” he says. But when asked what he makes of the Republicans who blocked DADT repeal from moving forward in the Senate last week, Dennis suddenly becomes evasive. “I’ve been a Republican for a long time,” he says. “I don’t want to get too deeply involved in the whole left-right binary…I think it’s an enormous distraction to actually getting things done.”

But more than anything, Dennis is an unreconstructed devotee of Ron Paul’s brand of libertarianism, which has both inspired and become subsumed by the modern-day tea party movement. Dennis had rarely been involved in politics before he volunteered for Paul’s 2008 presidential bid, crisscrossing the country to pound the pavement and knock on doors for his campaign. Like Paul, Dennis advocates for abolishing a slew of federal institutions—including the Departments of Agriculture, Education, and Commerce—and wants to phase out the income tax altogether. He similarly believes the Federal Reserve, in its current form, has inherently doomed the entire financial system to failure.

Paul has returned some of the love by endorsing the Dennis campaign and showing up at a few fundraisers and the antiwar rally in San Francisco last month. Paul’s support for his son’s Senate bid in Kentucky provided a big boost to Rand Paul’s insurgent campaign. But in the end, Dennis seems like too much of an outlier and a libertarian purist to become a tea party hero. His unorthodox views—together with the Sisyphean odds of winnings the seat—have left the Dennis campaign on the fringe of the fringe, without the groundswell of national support that’s catapulted other unlikely GOP candidates into the spotlight this year.

Recently, however, his David vs. Goliath campaign has managed to get a bit more visibility through less conventional means. Earlier this month, Dennis released an ad spoofing The Wizard of Oz, casting Pelosi as the Wicked Witch of the West, whom Dennis melts with a bucket of water labeled “freedom.” (The ad also marked a happy marriage between Dennis’s libertarian embrace of gold-backed currency—one popular interpretation of the film’s “yellow-brick road”—and the film’s cult status within the gay community.) The video went viral and helped Dennis rake in some more contributions from individual donors, who have been responsible for most of the money he’s raised to date. His campaign filings offer a snapshot of his grassroots support: businesspeople, lawyers, and retired folks, as well as one California-based donor who describes his occupation as “political scum slave drivers.”

Dennis has also managed to cobble together a few endorsements from political outliers like the pro-gay Log Cabin Republicans, as well as a trickle of support from tea party allies like the Tenth Amendment Center and LibertySlate 2010, which funnels money from the grassroots movement to Republican candidates. On the left, some activists have made some sympathetic noises as well. Gonzalez, the local Green Party icon, says that he’ll consider backing Dennis if Pelosi refuses to debate him, as his campaign has requested. Dennis personally confronted Pelosi about the issue after running into her at a Capitol Hill bar during his recent Washington visit. According to Dennis, she replied that “she’s not in [the] district enough to debate”—though she did pause for a photo op with him. (A Pelosi spokesman did not reply to a request for comment.) He’s also found a friend in Cindy Sheehan, the antiwar activist who challenged Pelosi as an independent in 2008, whom he first met at a protest against the Federal Reserve. “He is a good person who is truly antiwar and truly wants to make the world a better place,” Sheehan says.

But in one of the most solidly blue districts in the country, against one of Washington’s most powerful Democrats, Dennis doesn’t seem too deluded about his election-day prospects. As Paul was wrapping up his visit to the Bay Area a few weeks ago, the Texas Congressman had a few words of parting advice for the Republican hopeful. “Have fun,” Dennis recalls Paul as saying. “Whatever you do, have fun with this.”