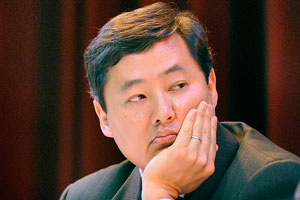 When the Justice Department’s report on the so-called torture memos was released in February, the agency’s internal watchdog noted that the five-year inquiry “had not been routine” and included the intriguing detail that a trove of key documents had been destroyed. These included almost all of Justice Department official John Yoo’s emails. The report noted that investigators for the agency’s Office of Professional Responsibility had been informed that these records “had been deleted and were not recoverable.” Without the emails of one of the primary authors of the memos, the OPR could only cobble together a partial picture of how Bush administration lawyers had crafted a legal rationale for the use of torture. “Given the difficulty OPR experienced in obtaining information over the past five years,” the report said, “it remains possible that additional information eventually will surface.”

Months later John Yoo’s emails have surfaced—some of them, at least. But these are probably not the records the OPR gumshoes were after. So the mystery of the missing Yoo emails remains.

In response to a lawsuit filed by Citizens for Responsibility and Ethics in Washington, the Justice Department has produced 900-plus pages of email records, and it says it has identified but is withholding an additional 147 documents for as-yet unspecified reasons. This might sound like a lot, but given that Yoo’s tenure as a top political appointee in the Justice Department’s Office of Legal Counsel spanned almost two years, from July 2001 to May 2003, the emails account for what would be less than a week’s worth of email traffic for most routine email users. Though the OPR noted that the supposedly destroyed records included “relevant documents” to its investigation, nothing of the sort was included in the files Justice handed to CREW. These emails are remarkable if only because they are so mundane—and because virtually none of them have anything to do with Yoo’s official Justice Department work. If the messages are at all representative of Yoo’s stint there, they suggest that the bulk of his time was devoted to arranging speaking engagements, authoring journal articles, and, as CREW put it in a release, “expanding his credentials” for his return to academia.

While these messages shed no further light on Yoo’s role in devising a legal justification for torture, they show he was a highly sought after speaker and debate participant—often at events sponsored by conservative organizations. According to the emails, he received and often accepted numerous invitations to speak on terrorism-related issues to national and campus (Yale, Vanderbilt, University of Chicago, etc.) chapters of the Federalist Society, the conservative lawyers group of which Yoo is a member. Of the emails discussing internal Justice Department matters, they are largely of the commonplace, interoffice variety (“a blue umbrella has been left in the lunchroom” and “if you have elected not to join the water club, then we expect that you will not take any of the water”).

Surely emails covering more controversial matters than these came and went from Yoo’s inbox. After all, OPR investigators were able to get a hold of several Yoo emails, and they reference a handful in their report.

Yet if the relevant emails aren’t in the 900 pages of records just released, where are they? The first place to look is in the 147 documents the Justice Department is holding back. DOJ lawyers have acknowledged that some of the emails in that group are “work related,” Anne Weismann, CREW’s chief counsel, says. But the group won’t have a good sense of what has been withheld until the Justice Department files a list—called a Vaughn index—explaining the nature of each document and the reasons why the agency considers it exempt from release.

Even if some of these withheld emails do relate to Yoo’s work—which may or may not involve his role in devising the legal strategy for using torture (he worked on many issues)—it’s unclear why there are so few of them. There still is a puzzle: why can’t the Justice Department produce a complete set of Yoo’s emails, or explain how most of his email records came to be deleted beyond recovery?

It’s also curious that the overwhelming majority of records the agency has been able to locate seem to deal mostly with extraneous matters of little importance. (In a letter to CREW, the Justice Department has implied that additional Yoo emails could exist, but finding them would require a department-wide search, as opposed to a search confined to Office of Legal Counsel. Weismann has asked DOJ how likely it is that any of Yoo’s emails are elsewhere in the department, but she has yet to hear back.)

Yoo himself has an explanation for the mysterious barrenness of his inbox—but it doesn’t hold up under scrutiny. After the OPR first reported that his emails had been deleted, he addressed the claim in a Washington Post online chat, noting that he was unaware “what happened, if anything, to any of my emails.” Besides, Yoo added, “the claim that there would be emails about this shows a lack of understanding of the world of intelligence.” He went on to explain: “The email system at the Justice Department is unsecured; it cannot be used to send classified emails. DOJ attorneys could not have emailed each other about interrogation methods or other CIA matters on this email system because those issues are classified at the highest level of secrecy.”

Classified material would not be routed over an non-secured network, but such information would be sent and received through a classified email system—a standard practice in government. If Yoo was suggesting that he and his colleagues never discussed matters relating to the interrogation program via email, he’s mistaken. The OPR’s report cites examples of emails to and from Yoo, including one in which he asked whether a particular detainee was “allergic to certain kinds of insects.” He would later draft a legal memo approving the use of insects to threaten detainees, even allowing the placement of bugs in a detainee’s “confinement box”—a tactic that was apparently under consideration for alleged Al Qaeda operative Abu Zubaydah.

The emails CREW obtained may not illuminate the inner-workings of the Office of Legal Counsel during Yoo’s tenure, but they do contain a farewell message or two that are revealing in their own way. In late May 2003, as Yoo prepared to depart the Justice Department, he emailed a handful of his closest Bush administration allies with whom he had worked on detainee and terrorism-related matters, including then-White House counsel Alberto Gonzales, the Pentagon’s top lawyer William Haynes, and David Addington, who was Vice President Dick Cheney’s counsel. “Thanks for lunch today, and I am looking forward to dinner next Thursday,” he wrote. “That was a great surprise with Secretary Rumsfeld, and I deeply appreciate the honor he bestowed on me. I feel that it would not have been possible had we all not worked together on these issues over the last two years. I hope you all know how much fun and what an honor it has been to work with you all.”

In a similar message to other Bush administration colleagues, including Michael Chertoff, then head of the Department of Homeland Security, he thanked them for “suffering my sense of humor and occasional outbursts” and noted that “we all together served our country to the best of our abilities during a time when our country was most in need. I will never forget that.” Preparing for an eventual return to his Berkeley law school professorship, Yoo seemed like he was going to miss being at the center of the action. “Please feel free to contact me about anything, professional or personal,” he wrote. “Upon returning to teaching, I won’t have a lot to do.”