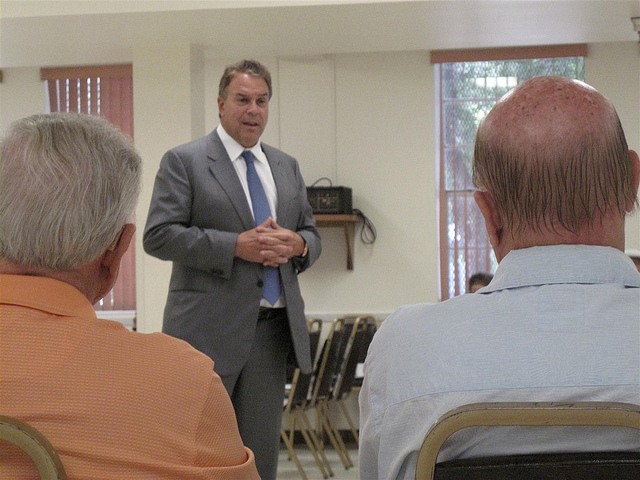 Jeff Greene, the self-made billionaire running for US Senate as a Democrat in Florida, likes to say that “Creating jobs is priority number one.” His slogan is “Jobs. Results. Florida.” In a new ad, “Never Let You Down,” Greene tells Floridians, “I’ve created thousands of jobs, I understand the economy, and I know what it will take to get things moving again.”

Imagine, then, the surprise of some part-time workers for Greene’s campaign who claim to have been stiffed by the candidate. In the run-up to tomorrow’s primary vote, Greene’s campaign said it’d pay $50 each day for workers to canvass neighborhoods, call prospective voters, and otherwise promote the wealthy, largely self-funded Greene. Now, some of those workers claim they’re not getting paid for their work. Here’s the Miami Herald‘s Beth Reinhard:

“He’s a crook,” said 22-year-old Sabrina Height, picking her teeth with a toothpick after enjoying the spread of free food [at a Miami Gardens restaurant on Sunday]. She said she was owed $200. “He’s giving us the runaround,” she said. “To tell you the truth, I don’t even know why I voted for him.”

James Alvin, 43, who said he was owed $250, said he would probably vote for Greene’s rival, Kendrick Meek “because of what his mom done.” His mother, Carrie Meek, served in Congress from 1992 to 2002, when Kendrick was elected.

Greene spokesman Luis Vizcaino insisted that everyone who worked on the campaign would be paid. “They’re here for a back-to-school event,” he said of the people leaving the restaurant with armfuls of spiral notebooks, folders and No. 2 pencils.

Greene faces Rep. Kendrick Meek in the Democratic primary for US Senate, for which voting day is tomorrow. (Early voting has already begun.) While Greene has challenged Meek, and even surged past Meek in the polls, his controversial past has caught up with him in recent weeks and dogged his campaign. According to a new poll from Public Policy Polling, Meek leads Greene by a whopping 51 percent to 27 percent. As PPP pollster Tom Jensen put it, “Jeff Greene made a bad first impression on Florida Democrats and the more they got to know him the less they liked him.”