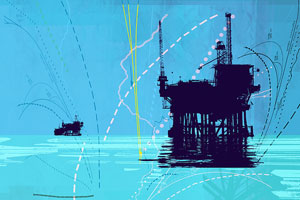 Just weeks before the Gulf oil spill, the Obama administration announced a massive expansion of offshore drilling. The proposal to open up hundreds of thousands of acres of virgin territory along the eastern seaboard and Gulf Coast and within the Arctic Ocean shocked enviros, but it was clear that the White House saw offshore drilling as an incentive to convince wary senators to support its larger energy plan.

Of course, that plan hit a brick wall on April 20, as the public was reminded that drilling might not be all that safe after all. And it threw a wrench into the already contentious debate over climate and energy policy in the Senate, even as senators tried to quell concerns by modifying the drilling expansion plans. At this point, we know that there’s no chance of getting a comprehensive bill this year, and it’s not even clear that the Senate can even pass a scaled-back spill-response bill. So a massive expansion of offshore drilling remains on the table, even as hopes dim for the broader plan happening anytime soon.

Now it seems that it’s largely up to the president’s Oil Spill Commission to determine how to proceed on offshore drilling. But from what the commissioners have said previously, this is a question of how, not if; we shouldn’t expect them to advise the Obama administration to changes its plan to expand offshore oil and gas development.

Which is why it was telling Wednesday as the commission held its first hearing in Washington, DC, and repeatedly returned to the question of who, exactly, endorsed the drilling expansion in the first place. Among the witnesses were Jane Lubchenco, administrator of the National Oceanic and Atmospheric Administration, and Nancy Sutley, head of the White House Council on Environmental Quality. At three points in their hourlong appearance, commission members asked them to clarify whether their offices had been consulted before the vast expansion of offshore drilling was announced. (It was asked repeatedly because it took three tries to get a clear answer on the subject.) Commission Co-Chair Bob Graham, a former senator and governor from Florida, pointed to Obama’s own statement on the day the expansion was announced, in which he noted that it was “not a decision that I’ve made lightly,” but “one that Ken and I—as well as Carol Browner, my energy advisor, and others in my administration—looked at closely for more than a year.” (Ken, of course, refers to Interior Secretary Ken Salazar.)

The answer from both Sutley and Lubchenco about whether they’d been asked to give their opinion on the plan: Nope.

Now, Sutley’s job description at CEQ is mostly confined to making sure that federal agencies uphold the National Environmental Protection Act in their decisionmaking. Any involved on the part of CEQ would come down the line as decisions are made about lease sales or permitting. But Lubchenco’s role as the head of NOAA is much more central here. This is the agency charged with protecting ocean and coastal resources and responsible for evaluating the extent to which drilling operations might impact endangered species, marine mammals, or fisheries. One would hope that its guidance in the expansion plan would be crucial; but while Lubchenco said her agency offered comments on previous leasing plans and there was “formal and informal agency discussion at various points in this process,” NOAA was not asked to approve or disapprove of the plan. Some, though not all, of the agency’s concerns were taken into account, she said.

“You say now you were consulted, but were not part of the group that advised the president on the ultimate decision?” asked Graham. “That’s correct,” Lubchenco replied. Nor was her agency asked if it had the resources available to properly execute the additional responsibilities that this expansion would create, she said. At another point in the hearing, she noted that her agency is already “seriously hampered by a lack of resources” and time to do much of the oversight work it would like to do.