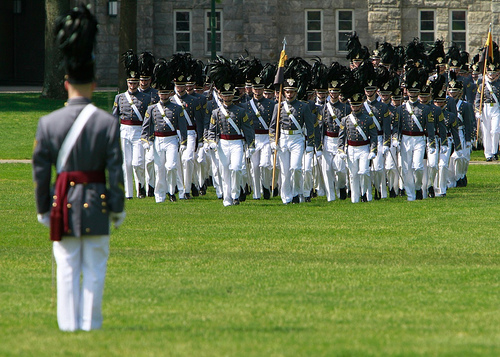 I’m an editor for Mother Jones magazine in San Francisco, specializing in military and defense affairs. But once upon a time I was Midshipman Adam Weinstein, USNA class of 2000…until, like you, I resigned from an Academy—Annapolis—at the beginning of my junior year.

My reasons for leaving were not due to DADT—rather, I was just a liberal with a big mouth and a lot of moral misgivings about the Academy’s internal workings, and I returned to the reserves after 9/11— but in your letter to the chain of command I sensed a similar dilemma, a forced choice between upholding the honor concept, which I loved, and being the person I was born to be.

A flood of emotions came back to me in reading of your decision. I remember especially the last few weeks after I’d submitted my resignation, waiting to be separated, while I still lived in Bancroft Hall, and was among my shipmates in the brigade, but sensed acutely that I wasn’t any longer of the brigade. It was sad, saying goodbye to a place I really loved, people I really cared for, and a job I really saw myself doing for many years. But there was a sense that it wasn’t my place, and I grew anxious about my next steps in life.

I suspect you’re going to go through a similar time right now. You’ve already been accepted to Yale, and given your academic interests in LGBT equality and military affairs, you’re likely beginning a fruitful, lifelong, love-hate association with the defense establishment. I’ve gone that route, and felt especially grateful for it. It’s given me the opportunity to be more critical of the military than most military people can be; it’s also enabled me to articulate the military ethos to fellow journalists and progressives in a way that doesn’t come naturally to them.

If you choose that route, though, you may feel the occasional twinge of regret over your decision. For a lot of reasons, but primarily this one: People will say you didn’t go all the way. You weren’t a real, proven member of your class, and aren’t qualified to speak as an authority. You’ll feel this pressure all the more, because it will come from elements that believe deeply that homosexuality is a sin, one that can’t be tolerated in the ranks. Their way of dealing with you will be to dismiss your experience and membership in the profession of arms.

I will tell you what my closest, most valued USNA classmates told me: You must never for a second give yourself over to the sour-grapes macho attitude of some cadets and alums that you “washed out.” You made an affirmative decision, one that demonstrates a degree of courage and strength that many in the Corps and the professional officers’ ranks will never know.

Beyond that, good luck. I hope to chat sometime. Or to at least meet you at an Army/Navy tailgater.

[For more on Cadet Miller’s ongoing case, read here; for more about her blog, which reveals a secret subculture at West Point, read here.]