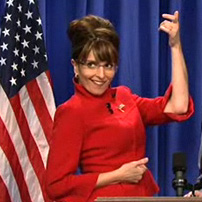 When Brazil’s political candidates stump with nicknames like “King of the Cuckolds,” “DJ Saddam,” “Jorge Bushi,” and “Kung Fu Fatty,” it seems a special kind of torture to say you can’t publically ridicule them.

Unfortunately, a decades-old law bans political satire on Brazilian TV and radio in the three months before the country’s October 3 elections: “Trickery montages” and other such “features of audio or video” are punishable by up to $112,000 in fines and the suspension of a show’s broadcast license. Supporters of the law say it keeps politicians from being portrayed unfairly. Everyone else calls it a relic of the country’s dictatorship era and a “threat to the intelligence of the Brazilian people.” Or, as Brazilian TV comedian Marcelo Tas puts it, the law is “a very particular Brazilian type of madness.”

Similar criticisms occasionally surface about the role of humor in US elections.  In 2008, some worried about the “Tina Fey effect” on Sarah Palin’s reputation. Fey, in turn, wondered if Will Ferrell’s charming, bumbling caricature of George W. Bush came off as a little too likable to voters.

Whatever the case, the last 10 years may have been too much to bear without a daily dose of Colbert or Stewart, particularly during election seasons. Hopefully, the protest that Brazilian comedians and satirists have planned for Sunday has some effect. Or at least it will generate some hilarious signs.

Here’s a few great moments in political humor to wish them luck:

3) “Barack Obama: He Completes Us,” The Daily Show

4) “Governor Alert – The Search for Mark Sanford,” The Colbert Report

5) “Fool Me Once,” a trickery montage of Bushisms