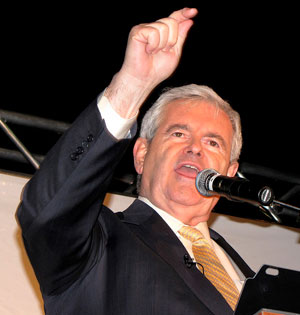 Obviously right-thinking people realize that the ginned-up “controversy” over the “ground zero mosque” is among the dumbest things that we, as a nation, have ever spent this amount of time on. (That’s one reason why President Obama shouldn’t have said anything about it.) The proposed “mosque” is not a mosque, is not at Ground Zero, and is right near an actual, bona-fide mosque that has been in the neighborhood for decades. And don’t we have more important things to be worrying about?

In any case, I just wanted to note the role of former Speaker of the House and supposedly “serious” Republican “idea man” Newt Gingrich in all this stupid, hateful stupidness. Last week, Gingrich started making a habit of comparing the proposed “mosque” (actually a community center called the Cordoba House or Park51 project) to “putting a Nazi sign next to the Holocaust Museum.” I hope I don’t have to explain just how offensive everything about that comment is. Gingrich is also scheduled to speak at crazy Muslim-hater (and Malcolm-X-is-Obama’s-dad theorizer) Pam Geller‘s September 11th rally against the “mosque” project alongside Dutch parliamentarian Geert Wilders, who wants to ban the Koran and make Islam illegal.*

People who think that Gingrich is a “serious” “idea man” and a credible candidate to lead the GOP into the next decade should consider his role in the “mosque” controversy and remember that he is also the person most responsible for perhaps the only stupider thing that we as a country have spent this much time on: the impeachment of Bill Clinton for lying about a blow job. All this while Gingrich himself was himself cheating on his (second) wife. But of course, it “doesn’t matter” what Newt does—America needs him too much: “People need to hear what I have to say. There’s no one else who can say what I can say. It doesn’t matter what I live.”

*UPDATE, 11:30 a.m. Tuesday: Gingrich has backed out of appearing—and Geller may have exaggerated his involvement in the first place. Here’s ThinkProgress:

Gingrich spokesperson Joe DeSantis told Politico that the Gingrich—who has been an outspoken opponent of the Islamic center—”is not scheduled to be at this rally. He is not speaking.” DeSantis said Gingrich’s staff had only agreed to send a video message, not make an appearance, but that too has now been canceled, but Gingrich won’t say why.