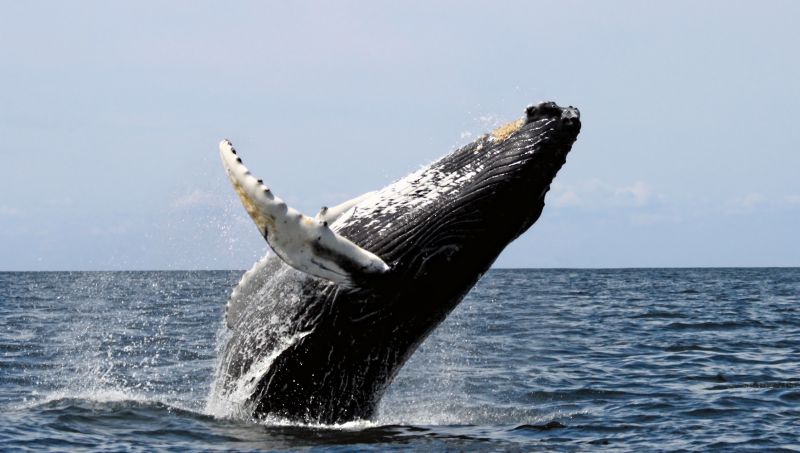 Humpback whales, who’ve been absent from Greenland waters for 60 years and are only now beginning to find their way back, will be rewarded for their recovery with harpoons. That’s because the IWC has granted Greenland an aboriginal quota to kill 27 humpback whales starting in October. But the hunters aren’t waiting for the season to start, as BlueVoice director Hardy Jones reports at the Huffington Post:

“[From the air] an hour out of Keflavik, I realized the humpbacks that have now become targets of the hunt were swimming a mere vertical mile below me. I had come to know this stock of whales in the Caribbean at Samana Bay and out on the Silver Banks. They were extraordinarily friendly toward me as I filmed them underwater. We looked at each other eye-to-eye, each knowing the other was aware of the other. The idea of their being harpooned is appalling to me. Along most of their migratory route off the eastern seaboard of the United States, the humpbacks are protected. In response to protection, they’ve become increasingly friendly and curious toward the whale watchers who now are part of a multimillion dollar business for charter boat owners, hotels, restaurants and transport companies. They approach boats and eyeball passengers with astonishing trust. That trust will now be rewarded by a harpoon.”

I also know these humpback whales and, like Hardy, I cringe at the thought that emerging relationships based on years of hard-won trust are about to be destroyed, certainly for the remainder of my lifetime, and at the cost of the whales’ lives.

Aboriginal hunts of marine mammals provide food for people who eat outside a cash economy. But as Hardy discovered in Nuuk, some Greenlanders aren’t honoring the noncommercial terms of the IWC that allow them to kill for themselves but not for sale. Without having to look far, Hardy found whale meat for easy, open sale in markets and restaurants.

“In the supermarket I found packaged whale meat. In a Thai restaurant I found whale sushi and whale and Rangoon Whiskey soup. In a greasy spoon burger/pizza joint I found whale steak. The Inuit of Greenland complain that they do not have enough whale to sustain themselves. They may be having a hard time getting whale meat because the big money guys are sucking it all up for the more lucrative commercial trade.”