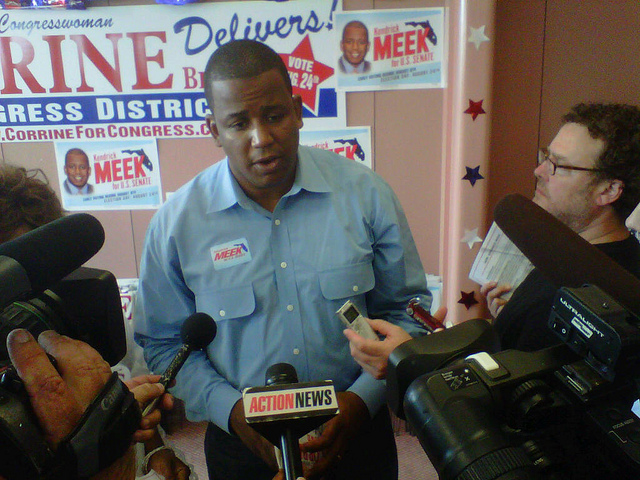 With nearly 40 percent of precincts reporting, Meek led Greene by 23 points. Despite being outspent by a five-to-one margin, Meek’s support from party luminaries like President Barack Obama and former President Bill Clinton helped pave the way to victory. Meek was also helped by what state officials predict will be a dismal voter turnout, likely no more than 20 percent, the St. Petersburg Times reports. With rain and thunderstorms keeping all but the most avid voters at home, that means moderates who would’ve picked Greene didn’t hit the polls, while committed and active Democrats, who mostly backed Meek, did.

Greene’s defeat tosses cold water on the 2010 election season’s anti-incumbent theme, as well as the rise and success of wealthy, self-funded candidates. (See: Meg Whitman and Carly Fiorina in California and Ron Johnson in Wisconsin.) In Greene’s case, his lavish spending on his campaign boosted his name recognition from practically zero to relatively well known. But that wasn’t necessarily a good thing. For instance, when on Monday I asked Hugo Vasquez, a parking lot attendant in Fort Lauderdale, about the primaries, Greene’s was the only name he knew, from the commercials and the Internet and the newspaper stories. But Vasquez added, “He’s the guy with the yacht, who went to Cuba, yes? He said he went to visit the Jewish community, but c’mon—who believes that?”

In a way, the Meek-Greene race featured two campaigns with opposite trajectories. While Greene’s campaign quickly gained steam, with ads for the candidate appearing both in Florida and outside the state and the national media latching onto his colorful past, recurring controversies ultimately sunk his run for office. In the past week or so, his chances at winning had all but disappeared. Meek, on the other hand, was criticized for his campaign’s slow start. But he built momentum through the primary campaign, secured crucial endorsements, and cruised to an easy victory on Tuesday.