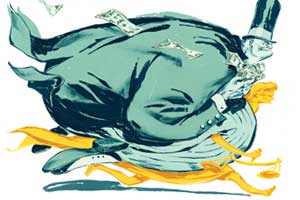 or much of the past decade, the Business Industry Political Action Committee has been a powerful force in helping tilt elections for corporate-friendly candidates. The blue-ribbon business group, made up of more than 400 companies and trade associations—from Lockheed Martin to the American Petroleum Institute and the Financial Services Roundtable—maintains the “Prosperity Project,” which includes a state-of-the-art database to track candidates’ stands on issues from regulation to taxes to health care. Many of BIPAC’s members circulate this analysis (PDF) to their employees. In the past, that’s all a company could do—provide employees information it hoped would prod them to vote for pro-business candidates. But now, thanks to the Supreme Court’s Citizens United v. Federal Election Commission ruling, these corporations will be able to go much further. They’ll be able to tell employees exactly, and in detail, which politicians their bosses favor—in effect, campaigning directly in the workplace.

In 2008, BIPAC spent about $2 million on the Prosperity Project. But now it’s looking to more than double its expenditure on what, with about 60 House and Senate seats in play, could be one of the most competitive election seasons in quite some time. A big reason is Citizens United, which gave companies, trade groups, nonprofits, and unions the green light to spend unlimited amounts on campaign ads and other advocacy tools pushing directly for the election (or defeat) of candidates. BIPAC president Greg Casey, though cautious about where and how the group might deploy these new tools, acknowledges that “the nature of the court ruling gives us a lot more places and activities for political communications than we had before.”

For starters, BIPAC is retooling its database to help companies “communicate” with employees about specific candidates. In addition, says Casey, the group or its member companies could choose to blanket the districts of members not congenial to its agenda with election messages via email and social networking tools. Or they could run ads directly supporting certain candidates; in the past, corporations could pay only for “issue ads” that mentioned a candidate’s positions but didn’t tell viewers who to vote for. BIPAC’s Casey promises, “If there’s an opportunity to seize, we’ll seize it,” adding that the group may take advantage of its newfound freedoms as early as this year’s elections.

You might wonder: Given that Citizens United allowed companies, say General Motors or Aetna, to get involved in elections directly, why would they need to go through groups like BIPAC or the US Chamber of Commerce? The problem, says Larry Noble, a former general counsel at the FEC, is that the decision is so unpopular many companies may not want to be seen as taking advantage of it. (In the wake of President Obama’s attack on the Citizens United ruling in the State of the Union address—he noted that it would allow special interests and “foreign corporations to spend without limits in our elections”—80 percent of Americans told pollsters they disagreed with the ruling.)

Companies in a few industries—energy, pharmaceuticals, and insurance—”have been politically aggressive [and] are most likely to engage in direct advocacy activities,” says Rick Shelby, the longtime top lobbyist at the American Gas Association and a BIPAC board member. Others, however, may choose to funnel their money through business groups like BIPAC and the Chamber. The latter, historically a big spender on issue ads, aims to raise about $50 million overall for this year’s political activities—25 percent more than it spent in the 2008 cycle. Chamber consultant and GOP operative Scott Reed doesn’t expect any trouble getting the cash: In a Citizens United world, he predicts, a lot of donors will say to themselves, “Let’s give them more money.”

To be sure, there will be some countervailing spending from unions and liberal advocacy groups; Gerald McEntee, the president of the American Federation of State, County and Municipal Employees, says the union wants to spend at least 25 percent more than it did in 2008, given that “Democrats are dropping by the wayside all over the place.”

But corporate America is where the real money is—and a growing number of pro-business groups are positioning themselves to serve as conduits for companies wanting to experiment with their new powers. “I think [Citizens United] is a gigantic change in the landscape,” says Nick Ryan, a spokesman for the American Future Fund, an Iowa-based conservative group that last year poured about $1.5 million into ads attacking health care reform and this year put at least $618,000 into a push to help Scott Brown win his Massachusetts Senate seat.

Another group, Americans for Job Security—long advised by David Carney, also a top strategist for Texas Gov. Rick Perry’s reelection campaign—has a track record of helping Republican candidates in tough races and is expected to ratchet up its spending this year. A newer arrival, the American Action Network, is getting buzz because of its blue-ribbon leadership—its founder and initial sugar daddy is Fred Malek, the onetime Nixon operative who is one of the GOP’s biggest fundraisers, and its CEO is former Sen. Norm Coleman (R-Minn.). The network’s president is Rob Collins, the former chief of staff to House minority whip Eric Cantor (R-Va.), also a prodigious fundraiser. And an even newer group, American Crossroads, has been getting fundraising help from former rnc chair Ed Gillespie and is seeking to raise $60 million this year.

There is, however, one wild card that could make corporations wary of writing big checks: transparency. At press time, Sen. Chuck Schumer (D-N.Y.) and Rep. Chris Van Hollen (D-Md.) were crafting legislation that would mandate stiff disclosure rules (PDF) for corporations, trade groups, nonprofit groups, unions, and the like. [UPDATE: Read the latest on the DISCLOSE Act.] The new rules would require these groups to disclose their spending, which could deter corporations that fear the limelight. But they might also make life more difficult for groups like BIPAC, which could be forced to disclose major contributors to their ad and advocacy efforts. Says Larry Noble, “If the disclosure rules truly force organizations to name their big donors, we may see a lot of corporations shying away from giving to the groups.”