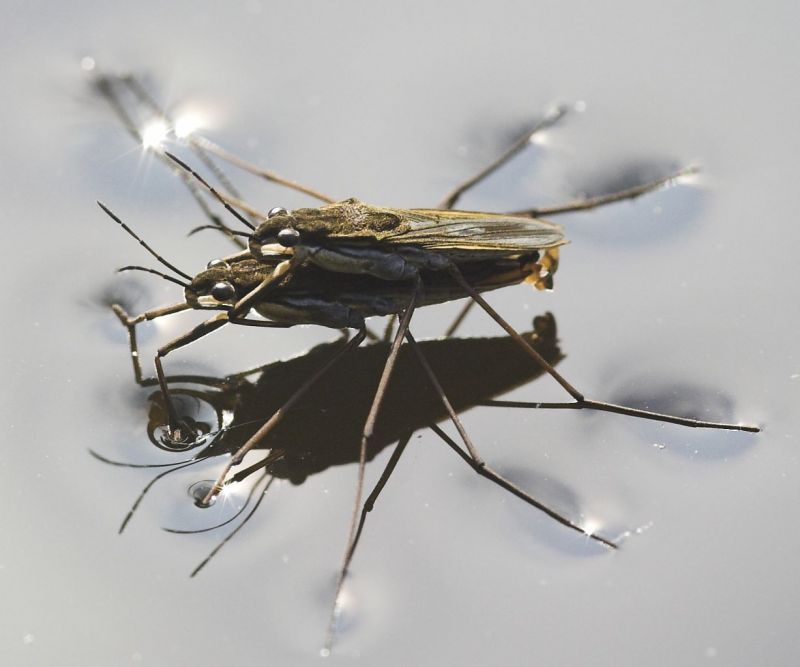 “Sex Week” wrapped up last Friday over at science writer Carl Zimmer’s blog The Loom, and a titillating week it was. Each post delved into the seedy underbelly of a species’ funky reproductive habits.

The three cases of animal sex that Zimmer discusses revolve around Darwin’s principle of sexual selection, which argues that certain aesthetic ornaments within a given species evolve to connote the biological fitness of individuals—think the elegant flair of a male peacock’s feathers, or the bright face and backside of a male mandrill (though these secondary sex characteristics are most often pronounced in the male of a given species, it can occur in females, too—see the spotted hyena or the anglerfish). It could be easy for deceitful members of a species to adopt these fitness markers without the mojo to back it up and trick their way into the gene pool. To avoid this situation, perhaps it takes too much time and energy for the weak ones to fake it: the widely accepted (or at least discussed) Handicap Principle states that these sexual signals take an enormous amount of resources to produce and that only the “strongest” individuals, the ones with the most energy to spare, can afford such an investment. This keeps individuals honest and a species strong.

Sex (that is, two fungi mating with one another) is but one way that yeast reproduce. The one-cell organisms can clone itself through a process known as budding—the micro equivalent of, say, a little version of you popping out of your side. But when yeast does mate, it relies on pheromones to do so—the micro equivalent, of, say, producing natural cologne. It turns out that the sexual displays of these microscopic organisms fit in line with the peacock feathers and mandrill buttocks of the Handicap Principle: the stronger the pheromone signal a yeast cell exudes, the more likely the opposite mating type is to be attracted to it; and the stronger the chemical release, the bigger the sacrifice in viability. So for a yeast cell to strut its stuff, it needs the viability to do so.

The mormyrids are a family of a couple of hundred species of fish native to Africa that discharge electrical fields. This rather unique feature holds a variety of purposes, including communicating with one another and hunting for prey in total darkness. But, this being a round-up of Sex Week, let’s get to the juicy bits—mormyrids after dark (literally—much of their lives are spent in the twilight of deep waters). The males from each species produce a unique electrical pulse that females can detect, allowing females to tend toward mating with the same species. Within a species of mormyrids, known as the bulldog fish, there is evidence of intraspecies sexual selection. Females seem to prefer males that produce longer electrical pulses, and in a bizarre display of courtship, butt heads with the male dozens of times before releasing their eggs. The longer pulses put males at greater risk of being eaten by predators, and the extra time invested is yet another example of what Zimmer refers to as the “honest advertisement from desirable males” that defines the Handicap Principle.

And now we get to the dark side of animal reproduction: water striders. These are the bugs you’ve seen skating about the surface of a lake or stream. They seem so innocent, and perhaps magical: they can, after all, walk on water. But when it comes to passing along one’s genes, all is not harmonious: the males sneakily force themselves onto the females and force copulation. Zimmer points out that this is the case with many species, and is a function of the number of males, with relatively large amounts of sperm, competing to fertilize the females, with relatively few eggs. When it’s copulation time, the male water strider forces himself onto a female, who fights with all her might to throw him off. If he is able to successfully insert his phallus, he puffs it up so that it is more difficult to remove. He then holds on for dear life as the female wrestles with him, sometimes for up to 12 hours. It turns out that, while hyperaggressive behavior may help an individual reproduce, as a species trait it is less than ideal—the females shy away from such displays of unruliness and thus reproduce less. It is in the species’ interest, then, to remain aggressive, but not overly so.