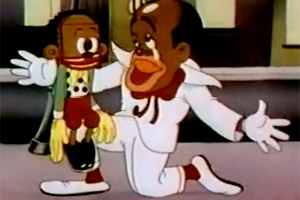 Over at The Root, John McWhorter, a fellow at the Manhattan Institute, makes the case for re-issuing a trove of 1930s and 40s-era cartoons that are rife with racial stereotypes and outright bigotry. Warner Home Video plans to release polished-up renderings of some classic Looney Tunes offerings—minus the so-called “Censored Eleven,” which feature black characters bathed in full-on minstrelry. “Primly holding these 11 cartoons back in the vaults in 2010 makes black people look, frankly, weak,” he writes. Shorts like Coal Black and De Sebben Dwarfs and Clean Pastures (“pieces of black performance history in their way”), he argues, remain products of their tasteless time. And McWhorter compares “the lingo, butts… violence [and] gold teeth” to what you see in Dre and Snoop videos. Thanks to more diverse representations of black people on television and film, he says

—think The Cosby Show, In Living Color, Do The Right Thing, and The Wire—
most people have moved on from Amos n’ Andy.

The shorts have been YouTube-able for some time. But for McWhorter, putting them out on DVD means symbolically coming to terms with an unfortunate (and inescapable) chapter of our history:

Yes, there will be a flutter or two of protest from people who can’t take a joke even at 70 years’ remove. But the sky will not fall in, and the kerfuffle will only increase the profits on a DVD that will sell like hotcakes from minute one. And that will not be because the cartoons are racist— but because they are, in spite of themselves, one part history and one part just plain fierce.

Black people, he says, should be able to laugh away the decades-old ugliness that the cartoons represent. If something festers in the bowels of the zeitgeist long enough, McWhorter’s argument seems to go, we can just accept it as part of our embarrassing past and move on. But while the ugliness of the Censored Eleven may be seventy years old, the attitudes and carelessness that produced them persist. (Witness some of the anti-Obama placards held aloft at conservative political rallies, or tea party leader Mark Williams’ supposedly satirical screed against the NAACP.) To laugh all that away, you’ve got to have a healthy sense of irony.

No doubt, the cartoons are powerful and thought-provoking, challenging our own notions of acceptability and forcing us to relive an apsect of our past that many might prefer to forget. But let’s face it: not everyone’s ready for Goldilocks and the Jivin’ Bears. Especially racists.