The federal government just released that spill report I referred to earlier. The report confirms the government’s claim that only about a quarter of the oil spilled from the well—or roughly 51.5 million gallons—remains at or just below the surface in the Gulf. Another quarter of the oil was dispersed, either naturally or via the nearly two million gallons of chemical dispersant, into the depths of the sea.

This is good news, but this doesn’t mean the problem is solved. There’s still a lot of oil out there—about nine and a half Exxon Valdez spills in total. So, while other news outlets are reporting headlines like, “Nearly 3/4 of BP spill oil gone from Gulf,” it’s actually closer to half. And, most importantly, the impacts of dispersing so much of that oil throughout the water column are still not well understood.

Also, as several others have pointed out to me, the report doesn’t include much in the way of specifics on the supporting data used to reach these conclusions. I’m trying to get more background from the National Oceanic and Atmospheric Administration (NOAA) on that.

Here’s the graph included in the government report: 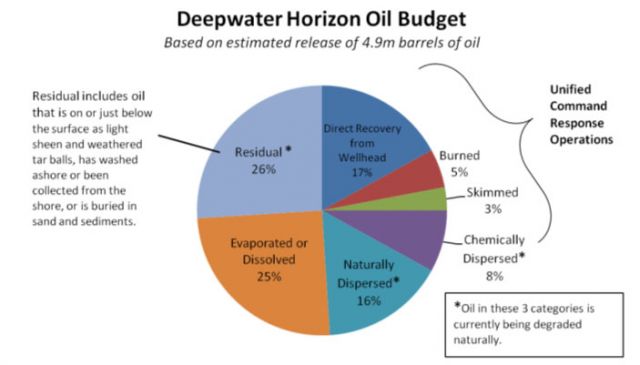