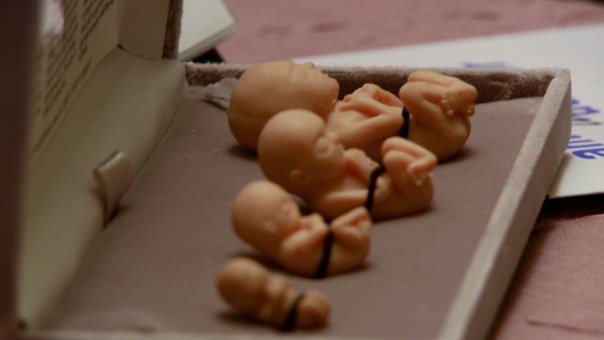 The new documentary 12th and Delaware, which premiered last night on HBO, presents a fly-on-the wall view inside two organizations in Fort Pierce, Florida, that cater to pregnant women. Though across the street from one another, in political terms the offices might as well be on separate planets; the Woman’s World clinic offers abortions, and the anti-abortion Pregnancy Care Center goes to great lengths to goad women out of them.

Directors Rachel Grady and Heidi Ewing, who also created Jesus Camp, plant their film right in the middle of an issue that may be on the minds of politicians everywhere, but is not always an easy topic to broach in conversation.”It’s just a headache,” Grady admits, referring to the film’s subject matter. Even though 12th and Delaware cozies up to controversy, “in our opinion it’s been hard to get media coverage for the film,” remarks Grady, who explains that they had trouble getting traction in the TV review world.

That may be because the film presents both sides of an issue without making an up-front claim as to whether the directors are anti-abortion or pro-choice (though, because the footage reveals anti-abortion protesters who lurk outside the abortion clinic’s windows, shake fetus dolls at passerbies, and agree with a local priest who calls abortion ritualized blood sacrifice, it becomes pretty clear where the directors would end up on the spectrum). A reviewer has to work harder to write about it, explains Grady, because it’s impossible not to take a stand on the abortion issue when you discuss the film.

12th and Delaware arrives during a year where anti-abortion organizations are throwing around millions of dollars to elbow out candidates who voted for the health care bill simply because it did not explicitly come out against abortion; it’s a political atmosphere taut with the enmity between anti-abortion and pro-choice advocates. “It’s always been a third rail in politics,” Grady explains, “but I think that has accelerated.” Outside of the political realm, the danger surrounding abortions seems to have accelerated as well. During the filming process, Kansas abortion doctor George Tiller was murdered, and more and more abortion doctors began to fear for their safety, wearing bulletproof vests and hiding their faces under pillowcases, like the ones shuttled into the garage of the abortion center in the film.

12th and Delaware focuses mostly on the antics of the Pregnancy Care Center, run by an activist and non-medical professional named Anne, and the women it caters to, many of whom have no idea that it does not provide abortion as an option. Anne and her staff do whatever they can, including buying the patients McDonald’s and terrorizing them with graphic videos of abortion, to convince them to abandon the “evil” and “brutal” abortions they may have planned, and they refuse to even mention the abortion center across the street when women request them.

Anne’s Pregnancy Care Center is emblematic of the anti-abortion movement, a movement that has quietly and cunningly convinced hundreds of thousands around the country that the pro-choice stance is unacceptable. “Someone came up with the idea that this is a woman’s body and she can do whatever she wants with it. Unfortunately, that is not true,” seethes Tony Lucchese, a protester who shows up in the film and later stalks an abortion doctor in his car.

While the anti-abortion movement certainly appears in the courtroom and during campaigns, it is perhaps outside the political world that it has gained most of its power. “A lot of the inroads the pro-life movement has made have not had much to do with legislation,” says Grady. While there are 816 abortion centers across the country, there are five times that many anti-abortion pregnancy centers. The truly chilling moments in the film for me are when Anne attempts to coax women who are clearly incapable of providing for another child, sometimes using deceptive and manipulative measures in the process, simply because she has decided that this is her life’s work (and she feels guided by the voice of God).

No matter how much I disagree with Anne’s words, her relentless activism and the labor of those like her have had a huge affect on people’s lives. While 12th and Delaware doesn’t leave us with a clear conclusion nor a great solution on how to bridge the divide between two stubborn sides, it does serve as a reminder that for every media outlet or writer that shies away from the abortion issue, there are five Annes ready to conscript pregnant women to their cause.

12th and Delaware will air again on August 4th, 5th and 6th on HBO.