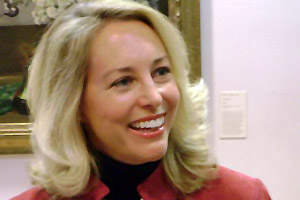 Valerie Plame Wilson suddenly went from being a CIA covert operations officer to a household name in the summer of 2003, when the Bush administration outed her to the press in retribution for her husband, former ambassador Joe Wilson, dismantling its shaky claims about Saddam Hussein’s nuclear ambitions. After unwillingly becoming a public figure, Plame laid low for a couple of years. But now she’s lent her expertise as an expert on nuclear proliferation to Countdown to Zero, the new documentary from the makers of An Inconvenient Truth that aims to jumpstart a post-Cold War movement to ban the bomb. (See David Corn’s recent article on the making of the film.) The film will leave you wondering why one of the world’s 23,000 nuclear bombs hasn’t already gone off—and how much longer it is until one does. (One expert explains that smuggling nuclear material into the U.S. is as simple as hiding it in a box of kitty litter.) Plame Wilson talked to Mother Jones about appearing in the film, how we can tackle a problem so big, and the upcoming movie about her, in which Naomi Watts plays the reluctant celebrity spy.

Mother Jones: At the CIA, you specialized in nuclear counterproliferation; Countdown to Zero is largely about how easy it would be to buy, steal, or build a nuclear weapon. Did you learn anything new from the film?

Valerie Plame Wilson: I’ve seen it several times now, and I was surprised at points. They talk about the flight over the Carolinas in the early ’60s where a plane crashed with a nuclear weapon on board. I didn’t know about that. I was not familiar with that incident in NORAD where the $1computer chip made everyone think it was the real thing instead of a training exercise. As the film talks about, there’s always the potential for accident, miscalculation, or madness. Along with the terrorist threat, those are, unfortunately, very real possibilities.

MJ: The movie identifies the three main nuclear threats as madness, accident, and miscalculation. Which do you think is the greatest?

VPW: I would not want to assign numbers to any one of them. Ask BP executives how often low-probability events happen. I think really the only rational, sane way of proceeding is to set as your objective zero [nuclear weapons] and move toward that.

MJ: One of the things that really struck me is the wide range of people interviewed—you’ve got liberals like President Jimmy Carter, you’ve got conservatives like former Secretary of State James Baker. Is nuclear proliferation really a non-partisan issue?

VPW: I think it is; it certainly should be. I think Lucy Walker, the director, went to great lengths to demonstrate that. As you noted, you have people of all political stripes who speak in the film. The well-known liberal, Ronald Reagan, started this. And I think that’s a really poignant scene with Gorbachev’s interview, speaking about his 1986 meeting in Reykjavik with Reagan. These were two men who genuinely wanted to see a world free of nuclear weapons,and they genuinely wanted to achieve it. Gorbachev speaks with tears in his eyes with great sadness about what they weren’t able to accomplish. These two men really wanted to do that.

MJ: You’ve said that you don’t think it’s possible for the United State to keep nuclear weapons and not expect other countries to also seek them. Why is that? And why does mutually assured destruction no longer apply?

VPW: Because the Cold War has ended. It’s very simple. We are no longer living in a bipolar world. The chances that we will go to war with Russia are pretty much ended. Mutually Assured Destruction was a doctrine that worked very well for decades as a deterrent, but the world has fundamentally changed. These emergent terrorist threats and the spread of nuclear technology and materials have made it much more likely that terrorists will get their hands on a nuclear weapon and that just changes the whole calculus. I love the quote at the end of the movie by Rev. Richard Cizik: “If you’ve never changed your mind about anything, then pinch yourself, you might be dead.” The world has changed and we need to start talking about this.

MJ: With the movie, were you worried about the problem seeming too big, too inevitable—about leaving people feeling less empowered?

VPW: The point was not to scare people into inaction. It is one of the pretty overwhelming and intimidating subjects that you kind of want to dive under the covers and not think about. But I think that the film does leave you with a sense that there is a way ahead. None of us involved in the film would have done it if we didn’t think that we couldn’t actually make a difference. I truly believe that we are such a great country and our greatness comes from having held out dreams to the rest of the world and say, here’s where we’re going to go. Whether it’s the Marshall Plan or applying civil rights to all our citizens, or getting the first man on the moon. Here’s our challenge, which is truly existential in nature, for this century. Here’s what we’re going to do. We are ultimately going to head to zero. It’s inspiring and it’s obviously a challenge.

There’s a big social action campaign that has been constructed around the film and your readers can go to GlobalZero.org or TakePart.com. So when they come out in the sunlight after seeing the movie and are blinking and going, Geez, they can actually do something. You can go to these sites, you can petition your senator to ratify the START treaty, you can sign the Global Zero Declaration.

MJ: What works better for tracking down nuclear weapons in places like Iran, people on the ground or technology, like satellites for example?

VPW: You have to use everything at your disposal. There’s all manner of collecting intelligence. One is not necessarily better than the other, but having been an operations officer I think human intelligence is the only one that will actually tell you intent. You cannot get that from other sources. But you need to use everything. Not for a minute is anybody suggesting that Iran, or North Korea for that matter, will fall in line because we’re leading by example. We’re not proposing to do this unilaterally, and neither do we believe that it should be a double standard, that only certain countries should have nuclear weapons.

MJ: You mention “judging intent.” You’re convinced that Al Qaeda and Bin Laden would set off a nuclear bomb in the U.S. if they could.

MJ: One thing that I found particularly chilling in the film was the statement from one commentator, who said, essentially, that a single blast in the United States would be the end of civil liberties, because everyone would want the government to step in and do everything they could to prevent another bomb going off. Does that ring true to you?

VPW: I think a nuclear detonation is society-altering in ways that other attacks, even as horrific as 9/11, are not. This isn’t because we have power-hungry political leaders, but I think it might be demanded by the people themselves out of fear. I agree with you, that it was one of the most chilling statements to me. It was General Tommy Franks who talked about a nuclear detonation being the end of civilian government as we know it. I think he spoke about it in Cigar Aficionado, believe it or not.

MJ: This movie puts a lot of faith in the ability of public opinion to enact changes within government. You’ve worked in one of those big government organizations. From your experience there, how much impact does the public really have?

VPW: There is a scene in the film where President Kennedy was talking to rapturous crowds about nuclear defense and they’re going crazy [in support of the Limited Nuclear Test Ban Treaty]. And he quipped, “If I’d known this was so popular I would have done it a long time ago.” While it’s our highest political leaders who ultimately put their signatures on these things, it is driven by the people. If we’ve learned anything from the last eight years with the debacle in Iraq, it’s that we must hold our government to account for their words and deeds. You’ve seen the whole Washington Post series on the intelligence community and that it’s bloated—that’s all true, I’m sorry to say, and all very disturbing. But I don’t lose faith in the American people.

MJ: You used to be a covert CIA officer, and now there are movies being made about you, songs being written, you’re being interviewed all the time. Which is more glamorous, the life of a spy of or the life of a media star?

VPW: I would much prefer to be overseas in a covert capacity working on these issues, but that is hypothetical. That is no longer open to me. So if I can use my voice in this manner, and talk about something that I care about, then I feel fortunate. It’s easier than having been through the mill that my husband and I went through. We have remade our lives outside Washington. We’re now in Santa Fe and we’ve rebuilt them, personally and professionally. It’s certainly nothing that I anticipated.

MJ: Some of our readers want to know what they can expect from Fair Game, the movie adaptation of your story?

VPW: Naomi Watts and Sean Penn give a really powerful performance—no surprise there. I think it’s an accurate portrayal of what we went through. It tells the story of speaking truth to power and the consequences thereof.