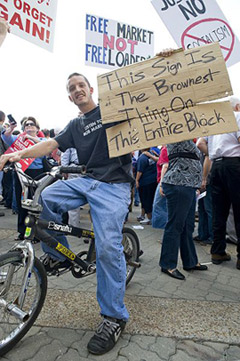 Wow, Tea Party Express! What better way to defend your stale astroturf movement against charges of racism than by writing a racist letter to the… National Association for the Advancement of Colored People. The letter excerpted below is from Tea Party Express spokesperson Mark Williams, who wrote it in response to the NAACP’s recent resolution to condemn the party’s racist antics. After the NAACP passed the measure on Tuesday, Williams told CNN “I am disinclined to take lectures on racial sensitivity from a group that insists on calling black people, ‘Colored.'”

I read Williams’s letter. And after calming my visceral aversion to its blatant bigotry which almost stopped me from writing about it, all I can say is… thank you Mark Williams! Thank you for exposing your organization’s true intentions better than any Yes Men parody ever could. The letter has since been removed from Williams’ Website, but thanks to Ta-Nehisi Coates from the Atlantic, excerpts from it appear below. You can read it in its entirety here:

We Coloreds have taken a vote and decided that we don’t cotton to that whole emancipation thing. Freedom means having to work for real, think for ourselves, and take consequences along with the rewards. That is just far too much to ask of us Colored People and we demand that it stop!…

The tea party position to “end the bailouts” for example is just silly. Bailouts are just big money welfare and isn’t that what we want all Coloreds to strive for? What kind of racist would want to end big money welfare? What they need to do is start handing the bail outs directly to us coloreds! Of course, the National Association for the Advancement of Colored People is the only responsible party that should be granted the right to disperse the funds.

And the ridiculous idea of “reduce[ing] the size and intrusiveness of government.” What kind of massa would ever not want to control my life? As Coloreds we must have somebody care for us otherwise we would be on our own, have to think for ourselves and make decisions!

Perhaps the most racist point of all in the tea parties is their demand that government “stop raising our taxes.” That is outrageous! How will we coloreds ever get a wide screen TV in every room if non-coloreds get to keep what they earn? Totally racist!…

UPDATE: On Sunday, the National Tea Party Federation expelled Tea Party Express and Mark Williams “because of the letter that he wrote which he, I guess, may have considered satire but which was clearly offensive,” Federation spokesperson David Webb told CBS. That same day, NAACP president Ben Jealous issued a statement calling on Sarah Palin and Dick Armey to now denounce tea party racism. The NAACP has received death threats and hate mail in the wake of its resolution. It has published a slideshow of offensive tea party signs which you can view here.