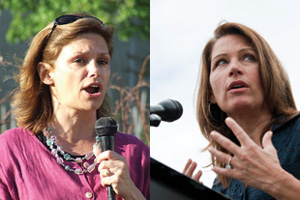 When it comes to enraging liberals, few Republicans in Washington can compete with Rep. Michele Bachmann. Since grabbing headlines in 2008 for calling then-candidate Obama “very anti-American,” the three-term Minnesota congresswoman has transformed herself from a back-bench newbie into Washington’s official ambassador to the tea party masses. She’s denounced the AmeriCorps public service program as “re-education camps for young people,” called upon Americans “to slit our wrists” to stop the health care bill, and declared that Democratic rule had turned the US into “a nation of slaves”—an unending stream of outrageous soundbytes that have turned her into a political lightning rod, perhaps rivaled only by Sarah Palin.

But while Bachmann’s telegenic rabble-rousing has turned her into an icon of the conservative base, it’s also placed her squarely in the Democratic Party’s sights. Having squeaked by her last election by only 3 points, Bachmann is now facing Democratic state senator Tarryl Clark in what’s already become one of the most expensive House races in the country.

Bachmann, supported by grassroots conservatives, has already raised an eye-popping $4.1 million as of June 30—and she hauled in $1.7 million in the last quarter alone, more than any other House member during that period. But her status as a controversy magnet has also benefitted her opponent. Clark’s campaign is trying to make the most of Bachmann’s intemperate remarks in its fundraising appeals, sending email blasts after her most outrageous remarks to the media and even creating a website called “Michele Bachmann Said WHAT?!” Clark has now banked some $2 million with the backing of Democratic allies and activists bent on knocking out the “Tea Party Prom Queen.”

But while Bachmann’s reputation as a far-right flamethrower has helped jump-start the opposition, Democrats admit that it’s not a message that’s ultimately going to help Clark prevail with voters in the 6th district. A heavily Christian, working-class enclave that’s often referred to as “Minnesota’s Bible Belt,” the district still favors Bachmann by 9 points, with outsized support from male and young voters. “The fact that she says things that are outrageous or worse, and the argument that she’s too conservative for the district doesn’t really resonate with folks—at least it didn’t in the last two election cycles,” says Zach Rodvold, Clark’s campaign manager.

In 2008, for instance, after Bachmann called Obama “very anti-American,” her Democratic opponent, El Tinklenberg, received a sudden influx of campaign cash, but he ultimately failed to persuade voters to support him in the final stretch because of her inflammatory rhetoric. Rather than calling Bachmann out for being an ideological extremist, the Clark campaign is now trying another tack—painting her as a national media celebrity who has disregarded the everyday concerns of voters in her district. “There’s an old Minnesota joke about a pastor whose congregation gave him a lapel pin to celebrate his humility. Then he wore it one day, so they took it back,” says Scott Cottington, a Minnesota-based Republican consultant. “Minnesotans are quiet people generally…and Clark seems to be trying to portray Bachmann as out of touch, gone Hollywood.”

Stretching from the Catholic outpost of St. Cloud to the working-class exurbs of the Twin Cities, the district leans conservative—but also has a heavy independent, populist-tinged streak. The district backed Senator Amy Klobuchar, a stalwart Democrat, the same year that it voted Bachmann into office; a decade after supporting independent Jesse “The Body” Ventura for governor, voters went for John McCain by nine points. “We’re a bipolar state, a populist state,” says Nancy Larson, a veteran Minnesota Democratic Party activist. “We like characters on both sides.”

A 48-year-old mother of two who was raised in Arizona, Clark is a former lobbyist on family and children’s issues and a key Democratic player in the state before she entered the state Senate in 2005. Energetic, poised, and personable, she won over her colleagues and ascended quickly to become assistant majority leader. Clark describes herself as moderate and touts the fact that she comes from a Republican family; she even voted for Ronald Reagan—twice. But her pro-choice stance also places her to the left of previous Democratic challengers to Bachmann. And her criticism of the national Democrats echoes the populist left, slamming the bank bailouts and poor regulation of oil companies like BP.

Casting herself as an economic populist, Clark has tried to focus on local issues in hopes of drawing a contrast with her opponent’s love of the spotlight and the tea party speaking circuit. But when asked about Bachmann’s most egregious misdeeds, Clark tends to veer clear of her opponent’s most inflammatory statements, saying that she prefers to focus on “bread-and-butter stuff.” She points out, for instance, that Bachmann refused to support federal funding to rehabilitate a deteriorating bridge in St. Cloud—only to show up for the ribbon-cutting ceremony a year later after the repairs were finished. “She opposes transit and rail, and fought a train that goes up to my end of the district…then comes to grab a headline,” says Clark.

Digs on transportation infrastructure may not have the same visceral impact as “nation of slaves.” But Clark is hoping her focus on more immediate concerns—like bringing home the bacon—will take hold in the recession-battered district, which has the highest foreclosure rate in the state. The approach is partly reminiscent of the unexpected primary challenge to Rep. Ron Paul (R-Tx.), another tea party favorite who was criticized for being more concerned with his national profile than his constituents during his primary race. Clark has alleged that Bachmann’s media and speaking schedule have caused her to miss more votes than any other member of the Minnesota delegation—and that she’s yet to pass a single significant piece of legislation. “She’s certainly trying to make this a national race,” says Clark. “But the race is in the 6th district, and she’s running around the country to far-right wing conventions,” Clark says.

Bachmann has begun to show signs that she isn’t taking her re-election entirely for granted. In between her headlining appearances for the Western Conservative Summit and Concerned Women for America, she’s begun to hit the trail back home with town hall meetings and parade appearances. “I’m home in my district every weekend—at some point—being with and talking to people in my district,” Bachmann told Mother Jones, shortly after a press conference for her newly created Tea Party Caucus, which began meeting in the House last week. And the congresswoman insists that her ambassadorship to the anti-government movement has the blessing of voters back home. “People in my district are extremely grateful for the work that I’ve done here to represent their voice…that I’ve made such a case here in Washington for what they believe in.”

Bachmann’s defenders insist that her national profile won’t drag down her re-election prospects. “If anything, I think it enhances it—she’s seen as being prominent. It’s a net plus,” says Ben Golnik, former executive director of the Minnesota Republican Party, calling her “one of the leading conservatives in Washington.” And Cottington, the GOP consultant, characterizes Clark’s approach as an attack of style over substance, arguing that district voters are ideologically much more in line with her opponent. Certainly Bachmann is no longer alone in her professed love for the tea party movement, whose polarizing rhetoric now permeates the upper echelons of the Republican Party. And her profile has helped her put boots on the ground as well: in 2008, youth activists from Generation Joshua, a national group for homeschooled Christians, turned out to knock on doors and canvass the district for Bachmann.

Clark herself hasn’t hesitated from using the national arena to boost her profile and ramp up her attacks on Bachmann. In her first attack ad of the campaign, Clark blasted Bachmann for saying that BP was the victim of “extortion” for having to pay for the oil spill—a spot that kicked off multiple appearances on MSNBC’s Hardball and The Ed Schultz Show. On Saturday, Clark spoke at Netroots Nation, the annual gathering of liberal bloggers and activists—an appearance that could help spur on the grassroots left to match Bachmann’s tea party army. And while she’s drawn heavy support from local and state unions, the single largest donor to Clark’s campaign has been EMILY’s List, the powerful national political action committee that backs pro-choice Democratic women.

The Clark campaign has tried to downplay such endorsements, maintaining that the grassroots activists who’ve come out to support the campaign so far have largely come from within the district. But if Clark is indeed one of the strongest challengers that Democrats have fielded against Bachmann—as many local and state party members believe—it’s at least in part because she shares some of her opponent’s own strengths in her appeal to the public. “They’re both attractive women, dynamic women,” says Larson. “But with totally different philosophies—and totally different ways of dealing with politics.”