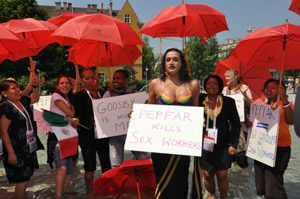 Today marked the end of the biennial International AIDS Conference in Vienna, where one crucial group remained absent from news headlines but not silent at the event. This is where Peninah Mwangi fits in. Mwangi’s been a sex worker in Kenya for 15 years. During that time, she’s also worked with the Bar Hostess Empowerment and Support Programme and the African Sex Worker Alliance to get sex work recognized as a job and to improve access to health and social services. For several years, both of Mwangi’s groups have applied for HIV/AIDS prevention funding through the President’s Emergency Plan for AIDS Relief (PEPFAR) and been denied. “We couldn’t understand why we were denied. Many women were dying,” Mwangi tells me on the phone. Then three years ago, a PEPFAR rep told her the reason: “We cannot fund you unless you get out of sex work.”

PEPFAR’s condemnation of sex work is why Mwangi is currently in Vienna for the AIDS conference. During the week-long summit, amidst discussion of new HIV prevention strategies and the lack of money to disperse them, about 100 sex workers from all walks of life and their advocates marched through the IAC conference center chanting “sex worker rights are human rights.” The workers were not only making their marginalized presence known, they were protesting the PEPFAR anti-prostitution clause that keeps them from receiving US HIV/AIDS prevention funds.

Back in 2003, Congress mandated that in order for any group or organization to get US global HIV/AIDS funds, it must have “a policy explicitly opposing prostitution and sex trafficking.” (See: Sex, American Style). The 2008 PEPFAR fact sheet states “prostitution and sex trafficking are abusive and dehumanizing to women, and they fuel the spread of HIV.” It’s not clear whether former-President Bush—who implemented PEPFAR and its anti-prostitution pledge—recognized the difference between sex trafficking and prostitution, spoke to any sex worker-run organizations that combat exploitation, or spoke to groups that seek HIV preventative care and battle sex trafficking. The anti-sex worker, anti-trafficking pledge left sex worker organizations—which incidentally work with one of the most at-risk populations for HIV (PDF)—out in the cold.

“We need HIV treatment but we don’t need the mandate that sex workers are excluded,” says Pisey Ly of Cambodia’s Women’s Network for Unity (WNU), a sex worker advocate organization. When WNU applied for US HIV prevention funds, it was denied and told to drop its sex worker status, Ly says. It refused. “The original idea behind WNU was to be an independent sex worker organization, to provide sex workers with ownership and leadership to speak about the issues that effect their lives,” Ly says. Because of PEPFAR’s anti-prostitution policy, Ly says, many donors and NGOs that once worked with Cambodian sex workers have abandoned them for fear of losing their US funding.

Meanwhile, unprotected intercourse between sex workers and clients is the main cause of new HIV infections in Asia, the Caribbean, and Latin America, according to the US Department of Health and Human Services. Audacia Ray, a communication consultant for the Global Network of Sex Work Projects (NSWP), which organized the IAC protests, says that by excluding sex workers PEPFAR is shooting itself in the foot. “If USAID is truly interested in protecting at-risk people from HIV, it would not use the PEPFAR funding regulations to restrict funding,” says Ray, a former sex worker herself.

According to Ray, sex workers have been organizing at IAC since the 1988 Stockholm conference, but “this year marked the largest contingent of sex workers we’ve ever had at an IAC.” I emailed the Office of Global AIDS Coordinator to find out more about why the anti-prostitution pledge was included in PEPFAR but got no response. If PEPFAR’s argument against funding for sex workers is that sex work is illegal, Ray points out its flaws. “The other two most at-risk populations are men who have sex with men and intravenous drug users. Both of these behaviors are frequently criminalized, yet there is funding available… for these groups,” she wrote me in an email. “Also there is a difference between supporting illegal activity and supporting people who are stigmatized, criminalized, and vulnerable to violence from state agencies, police, clients, and intimate partners. You can support the human rights of people without morally approving of how they make a living.”