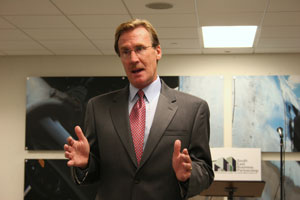 It’s been a pleasant news cycle for John Hickenlooper. The Denver Mayor is the Dems’ candidate for Governor of Colorado, and his main opponent, GOPer Scott McInnis, has been accused of plagiarizing a whole bunch of stuff. Now the non-profit foundation that paid McInnis wants its $300,000 back, and the Colorado Statesman reports the foundation may get its wish:

“I have said since this matter was brought to my attention that the articles provided as part of the Hasan Family Foundation fellowship were faulty,” McInnis said in response to the foundation’s demand. “I explained how this problem arose, and I accepted responsibility.

“I apologized to the Hasans for this mistake, and I expressed my determination to make it right with my dear friends. I will be in contact with the Hasan family to make full payment arrangements. I agree with the Foundation that this brings this matter to a close, and I look forward to continuing to speak on the campaign trail about the critical issues facing all of Colorado, including jobs and economic recovery.”

McInnis’ “explanation” of “how this problem arose” consists of blaming it all on his research assistant, Rolly Fischer, who says McInnis is lying. Fischer told a local news station that he “never knew about the foundation or any foundation Scott was associated with” and “had this sophomoric assumption that he wanted [the articles Fischer had gathered] for his own inventory.”

If I worked for the Hasans, I’d be happy to be getting my money back (which is essentially an admission of wrongdoing), but I’d still be annoyed. Even if McInnis’ story is accurate, and Fischer is lying, McInnis still apparently failed to do all the work he was paid $300,000 to do. Now McInnis is back on the trail and “ready to fight.” Is he going to get someone else to do that for him, too?