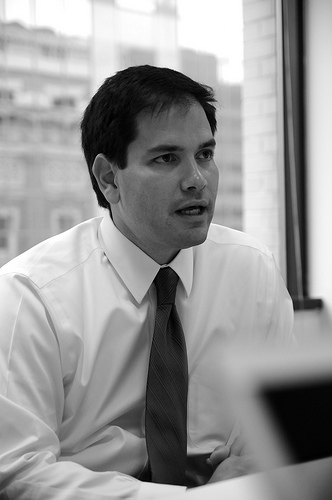 Marco Rubio, the Florida GOP’s candidate for US Senate, loves to burnish his conservative chops. At least eight of his recently released “Marco’s 12 Simple Ways To Grow Our Economy” call for—big surprise—slashing taxes, like extending the 2001 and 2003 Bush tax cuts, cutting corporate taxes, ending the death tax, and so on. But what about helping out the unemployed? That’s not in Rubio’s 12 economic ideas, and on Monday, the candidate waved off the idea of extending emergency jobless benefits—a position he’s standing by even with a sky-high 11.4 percent jobless rate in Florida and when a vast majority of Americans support more jobless support.

In Tampa on Monday, Rubio said the only way Congress should approve more help to millions of unemployed Americans is if lawmakers make cuts to offsets the cost of more benefits, the Miami Herald reported. “At some point,” Rubio said, “someone has to draw a line in the sand and say we are serious about not growing debt.”

The former Florida House speaker’s commitment to chipping away at the federal deficit is, to some extent, admirable. In the long term, the federal debt, if untamed, is a worrisome issue. But Floridians will elect a new US senator in November. So how smart of a political move is it for Rubio to dismiss our jobs crisis when more than 200,000 Floridians have already lost their benefits, and when 62 percent of Americans in a recent ABC News/Washington Post poll said Congress should extend benefits to the unemployed?