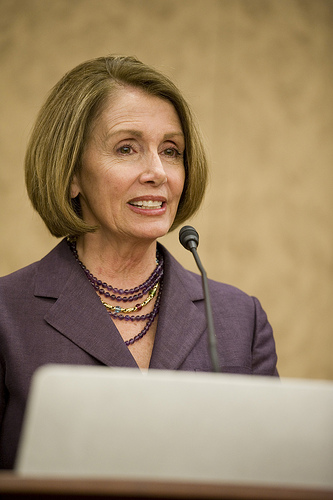 Think you’re frustrated by the Senate’s inability to act on climate change? Try being Nancy Pelosi. The House climate and energy measure that she worked so hard to pass was attacked by many on the left as a half-measure. Then she had to watch as the bill, which she will admit was, at best, a “compromise” by the time it passed in the House, was watered down even more and eventually burried in the Senate.

When Pelosi took the reins as Speaker of the House following the 2006 election, one of her first actions was the creation of the House Select Committee for Energy Independence and Global Warming. And within the first two years of Pelosi taking over as Speaker, the House passed the American Clean Energy and Security Act, or ACES, a landmark climate and energy package. It was a tough vote, by all accounts, passing by a narrow margin and incurring a good deal of “cap and tax” rhetoric from opponents on the right.

So it has been particularly painful to watch what was already a “compromise bill,” as Pelosi calls it, in the House die repeatedly in the Senate. First, there was a bill from Sens. Barbara Boxer (D-Calif.) and John Kerry (D-Mass.), which looked much like ACES. That died in November. Then Kerry teamed up with Lindsey Graham (R-SC) and Joe Lieberman (I-Conn.) to pen yet another bill. They finally rolled out a bill more than seven months later, but only after losing the lone Republican cosponsor and bending over backward to please big oil and other interest groups. When that died, there was fleeting hope that maybe a pared down, utility-focused cap could pass, but that soon died too.

Pelosi has tried to remain positive. “This is an issue the Senate can’t walk away from,” Pelosi told the crowd of liberal activists at Netroots Nation last Saturday. Even if the Senate has, for now, Pelosi is optimistic. “It cannot be ignored,” she tells Mother Jones. “I have confidence in the issue.”

Despite her confidence that the issue resonates with voters, the bill has caused electoral angst for some House members. ACES was demonized by the right as an “energy tax” and dismissed by plenty of moderate Senate Democrats, not a good signal for those House members who face an uncertain future this November. But Pelosi says her members aren’t too worried.  “I’m very proud of House members for taking the bold stand they did,” she said. “Our members are proud of their vote. They know why they voted for it.”

She called on advocates of climate action to create a stronger grassroots push that will ensure that members of Congress know this issue is important. “There really has to be a stronger outside mobilization on all of these, because members are asked to take many tough votes, and we want to give priority to certain ones over others,” she said. “They have to hear from the outside how important this is.”

Pelosi was hesitant to be too critical of the Senate bill, which includes oil-spill response and some pared-down energy incentives. “I would like them to have a stronger bill coming out, but whatever they’re doing if we’re making progress going in a forward direction, I welcome it … I would have liked to have seen a better bill, but we’re not giving up on this.”

She held out the hope that ACES, the various oil spill measures, and the Senate’s energy provisions could be reconciled in conference at some point—and the House’s tougher energy and climate measures could be included. (Though at this point, even the Senate’s spill bill might be in jeopardy.) “We will go to conference on the bill,” said Pelosi. “There isn’t a chance that we won’t.” She didn’t rule out the possibility of dealing with it in a lame-duck session, though she said she hopes they don’t have to have one.

But to get anything dealing with energy signed into law, she continued, “they have to pass something first.”