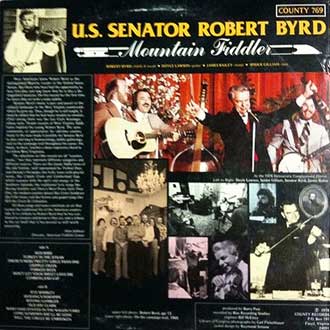 Last week, upon the passing of West Virginia Senator Robert Byrd, MoJo correspondent James Ridgeway posted this video on his blog, Unsilent Generation. The fact that Byrd was an accomplished old-time fiddler was no secret to his West Virginia constituents. Old-time mountain music is mighty popular with Appalachian voters, even now. But like me and Ridgeway, most Americans probably had no idea the man had musical talents. Byrd recorded this album, Mountain Fiddler, back in 1978, by which point he was already a senator. It was released by County Records, an old-time and bluegrass label in Floyd, Virginia, active since the 1960s.

I emailed Alan Jabbour, retired director of the American Folklife Center, who wrote the liner notes, hoping to learn a bit about how it came about. “I knew Senator Byrd pretty well and recorded him for the Library of Congress,” Jabbour wrote back. “And yes, he both fiddles and sings on the record. My friend Barry Poss recorded the actual LP record tracks and assembled the excellent back-up band of bluegrass musicians who accompanied Senator Byrd.”

Jabbour pointed me to West Virginia’s Dominion Post, which had interviewed him. (He didn’t feel like repeating himself.) Byrd, the paper reported, took up fiddle when he was young, and would break it out and play a few tunes on campaign stops now and again. “I think music was dear to his heart,” Jabbour told the DP. “You don’t get to playing a fiddle like that just because it’s useful in politics. You only get there because you played the fiddle when you were young and threw your heart and soul into it.”

There are plenty of hot fiddlers in Appalachia. How good was Byrd? “He wouldn’t have said he was a great fiddler,” he’d told the DP. “But there is a level of fiddling that you can fiddle at and everyone would say that is good. That’s where he was.”

His singing wasn’t too bad, either.