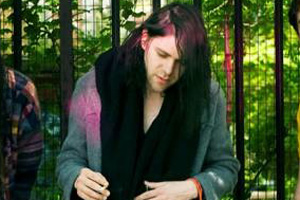 Pink has recorded hundreds of his songs on cassette since the age of 17, and getting the word out around his hometown by handing them to anyone willing to listen. But it wasn’t until he passed a tape to a member of the band Animal Collective at a show that he really got noticed. In 2004, the band released a Pink album on its Paw Tracks label. Five years later, he was signed to 4AD—home to indie giants Deerhunter and TV on the Radio.

Though Pink now tours with a full backing band called Haunted Graffiti (the first stable line-up of his career), his newfound indie fame hasn’t changed his live performances much: During a recent gig in San Francisco, he spent the majority of the show stumbling on and off the stage, screaming at the sound technician for minutes on end, and making incessant whooshing noises into the microphone. Was this anxiety or performance on display? Ariel Pink may just be the Andy Kaufman of the Pitchfork Generation. I caught up with Pink recently to talk about his odd ways and newfound success. While you’re reading it, you can listen to this recording of “Round and Round” from his 4AD album, Before Today. (There’s no video—did you really want to watch video of that anyway?)

Ariel Pink: The name was tossed off without much thought. I’ve always felt like a name doesn’t count, doesn’t mean anything until the music behind it validates it. For a while I wanted to change names every time I played and recorded. The world is full of bands and bullshit, and if I’m doing a stupid art project like rock ‘n’ roll then I want to spare my audience as much as possible. But how it is now, music is not just an experience but an appearance.

MJ: Do you fall into this trap of appearance?

AP: I live in Los Angeles. Everyone in this town is living on their own glories. I’m a product of my environment.

MJ: How would you describe your musical vision?

AP: I would say it’s an amorphous, undulating, bubblegum pipe organ in the sky—in an organic sort of way.

MJ: Wow, I’m not quite sure what that means. Have you achieved it?

AP: Ninety percent of my catalogue doesn’t cut it.

MJ: Is that frustrating?

AP: I’m not dissatisfied, just not satisfied in an ultimate sense. Nobody’s done what I’m trying to achieve. My goal is to make something special and pure, and that keeps me going, keeps me busy on the path of sobriety.

MJ: Your live shows have a reputation of being a bit of a mess.

AP: Man, that’s outdated information. There’s no booing anymore. I get a fair amount of negative publicity, and it takes precedence sometimes. I’m happy to live down some of this reputation I’ve acquired. I’m not crazy, not a recluse. I’m just an unusual artist.

MJ: Has signing with 4AD changed your music in any way?

AP: This is the first album I’ve recorded with a regular band, or with the input of anyone else. Having support from a label is huge. I’ve learned that I shouldn’t shrink from success. Though honestly I thought they’d be knocking on my door years ago.

MJ: What will you do if you reach your ultimate sound, that pipe organ in the sky?

AP: I will probably stop releasing music. This shouldn’t be a giant cum-fest on the filth of the world.