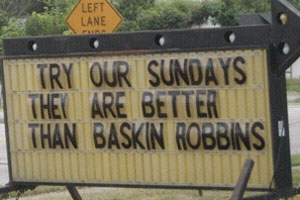 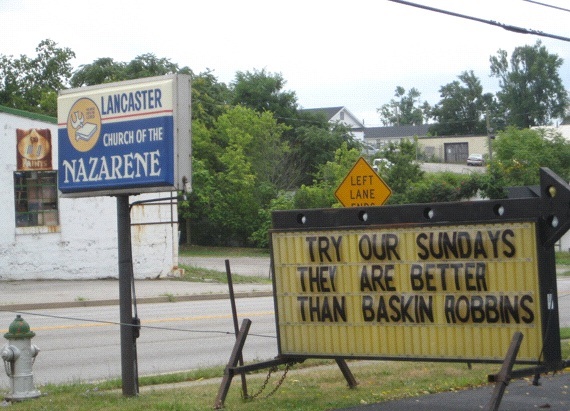 Sunday Best: Sometimes “God Bless America” just isn’t enough. The Lancaster, Kentucky, Church of the Nazarene demonstrates the advertising prowess of the nation’s spiritual marketplaceCrab Orchard, Kentucky—Looking back on it, I’m not sure what part of my arrival in Kentucky was more of an affront to Daniel Boone’s legacy: The fact that you can now take a tunnel under the Cumberland Gap, thereby rendering the most historically significant crooked smile in eastern North America totally useless; or the fact that his famed Wilderness Road into the Bluegrass, where Boone fought off bears and Indian raids, is now the site of a gimmicky campground where novice campers and RV-ers can set off $28 fireworks and play mini golf.

Whatever the case, we’ve made it into Kentucky, and we’ll be staying for at least a few more days. We’re hoping see Rand Paul while we’re here, but more broadly, because this is the first state on the schedule that I’d never so much as stepped foot in, I’m just looking to absorb as much as I can—so today I’ve shut off the iPod and cranked up the radio.

On one end of the dial, an evangelist is crusading against, of all things, the WE show Bridezillas. Turn the knob a bit, and there’s country, more country, some Top 40, and Glenn Beck, talking up the New Black Panther Party and Goldline (remember, kids: gold isn’t an investment; it’s an “insurance policy.”) And then, just like that, we hit “The General Store.” “The General Store” is Craigslist, if Craigslist were just one giant free-for-all hosted by a middle-aged woman named Renee; it is QVC, except you’re usually selling, rather than buying, and there are no complimentary fax machines to sweeten the deal and clutter your living room. It is like nothing I’ve ever heard.

The progression of callers transcends the conventional limits of diversity: One man calls up with a 350-pound whole-blood boar for sale—and an electric guitar. Someone else has a two-bedroom mobile home for sale, and a golden retriever named Rusty. Or rather, he had a golden retriever named Rusty, before he went missing around the Fourth of July—has anyone seen him? Dogs tend to get loose around the holiday, what with the fireworks and all, volunteers Renee, helpfully trying to make sense of the tragedy.

There are Bushmaster rifles, used pickup trucks, two pieces of wood that might work well for a chicken coop or something like that, eight pairs of children’s pants and eight pairs of shirts. One woman calls in to ask about a living room set that another woman mentioned last week. She doesn’t remember the phone number that was given, and the host isn’t much help—it was last week, after all—but our caller leaves her number anyway, “in case she’s listening.” It’s just like Craigslist, right on down to the missed connections.

Another program, “Big Swap & Tradio,” broadcast out of Middlesboro, provides basically the same service, with a few modifications. For instance, the host relays a message from a fellow named Chris, who’s still looking for work: “He’s a hard worker, good with his hands.” I won’t try to argue that “The General Store” somehow represents or explains Kentucky. But it’s one heck of a first impression.

And since I’ve gotten started, here’s another unrelated one: For the first time on my trip, I’ve started to really notice the intense market pressures that religious freedom puts on small-town churches. The signs along the highways are exercises in one-upmanship with, I think, the intent to bring in street traffic: One sign boasts, “Our Sundays are better than Baskin-Robbins”; another notes that its services are “prayer-conditioned.” When people like Alan Wolfe talk about “church shopping”—the market-style competition amongst various different kinds of (usually Christian) houses of worship—they’re talking about places like Kentucky.