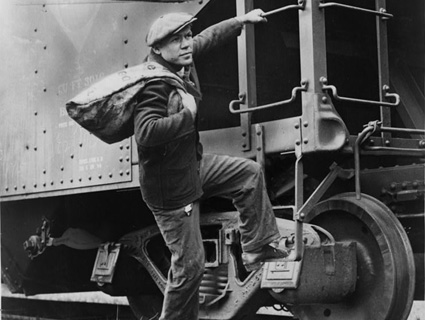 Outside Ocoee, Tennessee—My notes from Nashville are sparse and somewhat illegible: If I’m reading them right, the city was populated mostly by roving ensembles of high school musicians, and thirty-something males wearing boat shoes and white shorts; I suspect there’s more to it than that. Our stay was brief—we checked out our first minor league baseball game of the trip ($7 beer night! Go Sounds Go!) and then fled east—but one notable story did come out of it: My friend Alex met a man, in the restroom of a downtown hotel, who said he was “hopping freights” from Los Angeles to Boston.

He was dressed in green from head to toe, and wore scruffy blonde facial hair and a thick layer of accumulated sediment and grease on his face that his PR firm might have called “earth tones” or “special-ops chic,” but which Alex said made him look “like he was tinged green.” He hadn’t showered in ages. The man explained to Alex that all underground freight-hoppers (they’re a rather tight-knit community) have a guidebook, which they circulate to anyone who’s really serious about the craft. Bound together and passed around like an old-school ‘zine, it explains which cars you can and can’t jump on, when and where to do it, and, most importantly, how to evade the guards. He was in Nashville only by accident; he thought he’d hopped a train to Philadelphia, and now he was in a bit of a pickle. He needed to be in upstate New York in time for blueberry season, when, he said, a farmer had promised him $2,000 if he worked for two months—which sounds like a pretty bad deal, actually, but when you’re re-living the Great Depression, I suppose you’re not really in a position to pick your price.

Alex, weaned on Woody Guthrie, pretty much lost it at that point, and when he tells the story I just imagine him like Elmer Fudd in one of those old cartoons, who, upon receiving a blow to the head from a massive anvil or bundle of carrots or something, literally sees stars, gets all cross-eyed, and falls straight back to the floor.

We’re not planning on riding the rails from here to San Francisco, nor have we hot-wired any airplanes like the Barefoot Bandit, Colton Harris-Moore; if we’ve broken any laws, it can’t have been more than a handful of times—and then only because we really needed the ammo. But it did occur to me that, while I’ve written a lot about the places I’ve been, I’ve never really explained how it is we’re getting from place to place, and where we stay when we get there. So here’s a quick primer.

Since our weekly budget for lodging is $30, we’ve been forced to pretty much bypass motels altogether. Instead, we’ve camped out at national forests and RV campgrounds*, crashed with friends and friends of friends, and used Couchsurfing—an online network of people (“surfers”) who let you stay at their home for free when you travel (think of it as hitchhiking in the digital age).

So far our method has paid off: We’ve stayed with a city councilman and former mayoral candidate of a small city, a retired midwife who makes her own oven mitts, a political campaign staffer just out of college, a documentary filmmaker, an old Mennonite couple, college students at the University of Kentucky and Middle Tennessee State, a small-town doctor with a pet parrot, and an out-of-work architect who now makes tables to earn some extra cash.

*The most memorable of these parks was off a stretch of state highway in East Lancaster, Pennsylvania, sandwiched between an outlet mall, a Target, a cow pasture, and an Amish-themed amusement park called “Dutch Wonderland.” It may have been the greatest architectural expression of 21st-century America ever contained within a single city block.