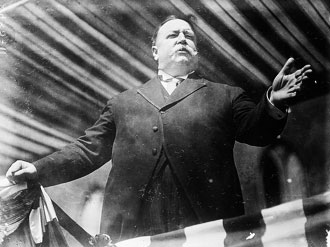 In a paper published this week by open-access journal PLoS ONE, Max Plank Institutue researchers Daniel Casasanto and Kyle Jasmin looked at the association between politicians’ hand gestures and the content of their speeches. After examining more than 3000 spoken clauses and 1700 hand gestures from John Kerry and George W. Bush in the 2004 election, and Barack Obama and John McCain in the 2008 election, they had ample evidence of a pattern: When discussing something positive, right-handers Kerry and Bush most often gestured with their right hands, while southpaws Obama and McCain both used their lefts. And the opposite held as well: If Obama was saying something negative, then, he was more likely use his right hand; Bush used his left. The researchers noted one particularly intriguing application for their findings:

“The hand that speakers use for spontaneous gestures provides an index of their feelings about the content of the co-occurring speech. If listeners can track which hand a speaker uses to gesture, they may be able to receive subtle clues to the speaker’s attitude toward the things they are talking about—albeit the clues are statistical, not absolute, and the listener must know the speaker’s handedness to interpret them.”

Casasanto and Jasmin explain this pattern with a psychology theory called the “body-specificity hypothesis.” The hypothesis essentially states that people with different bodily characteristics perceive the world differently. To put it another way, your body is your tool for interacting with the world, and your perception of the world is based on your interactions with it. You change the tool—in this case your dominant hand—then consequently you change the way you understand your environment.

In many respects there is nothing all that revelatory about the findings. The idea that we would assign emotional value to concepts like right and left is not new: Roman orators were coached never to gesture with their left hand, and the Catholic Church once held the position that left-handers were servants of the devil. In Ghana it is prohibited to point or gesture with your left hand. We still betray these associations in common speech, saying things like “right-hand man” and “out in left field.” But the finding helps make the case that associations of good with right and left with bad are derived not from Biblical and linguistic ideas, but from our own bodies. In other words, the root reason we associate right with good—and the reason the Bible does as well for that matter—is simply that the vast majority of us are right-handed. (And as a right-hander myself, I assure you this association is correct.)