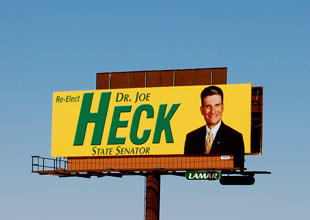 Everyone knows the Democrats are facing a tough November. But some Dems will have it harder than others. Rep. Dina Titus, a freshman from Nevada, has a particularly tough race. A recent Mason-Dixon poll shows her leading former state Sen. Joe Heck, 42-40. That’s actually somewhat good news for the congresswoman, who trailed Heck (that’s “Dr. Joe Heck” to you) in Mason-Dixon’s last poll of the race back in April. The excellent Swing State Project has the details:

Pollster Brad Coker claims Heck got a bounce last time around (which, you’ll note, was all the way back in April) thanks to Titus’s support for the just-passed healthcare reform bill. Color me skeptical. I’ll note that M-D seemed to alter its methodology in the interm, apparently prompting now for “other” and “none.” All of Heck’s shrinkage can be attributed to the appearance of these alternate options. Once again, it looks like Nevada’s quirky none-of-the-above feature might wind up doing Dems a big favor here.

In case you missed that, SSP is pointing out that Nevada’s ballot features an option to vote for “none of the above.” That could end up helping Titus—in fact, I’ll bet it probably helps incumbents in general. Anyway, both campaigns are raising money off the latest poll. “Dr. Joe” is aiming to “double our poll percentage by November 2″—good luck with that—while Titus claims “the momentum is on our side.” The two campaigns do agree on one thing: This is going to be a hard-fought race. President Barack Obama has already campaigned for Titus (while passing through the area in support of Sen. Harry Reid), and Heck spends about half his email on invective directed at the “liberal machine,” “liberal agenda,” and, of course, Nancy Pelosi. We’ll keep an eye on this one.