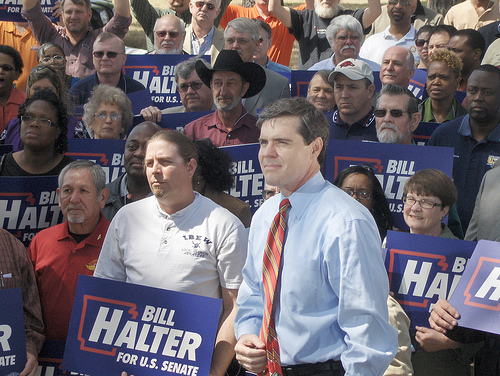 Big labor is on the march.

The AFL-CIO is unveiling the first phase of its on-the-ground operations for the November midterm elections. The nation’s largest federation of labor unions is set to distribute 300,000 pieces of campaign fliers at workplaces in 23 different states, from Florida and Michigan to Colorado to New Hampshire, the Washington Post reports. The fliers tackle House races all the way up the gubernatorial elections, taking both positive and negative positions depending on the candidate.

But will any of it matter?

This spring, we saw AFL-CIO and other labor groups throw their full electoral muscle—not to mention $10 million—behind Arkansas Lt. Gov. Bill Halter, a progressive challenging incumbent Blanche Lincoln for the state’s Democratic nomination to the US Senate. Unions had ripped Lincoln for being anti-worker, citing her opposition to card-check legislation, which would’ve made it easier for workers to unionize and boosted dwindling union membership totals. The unions were so intent on helping Halter topple Lincoln that AFl-CIO and the American Federation of State, County, and Municipal Employees (AFSCME) were among the first groups to take advantage of the Citizens United ruling, cutting campaign ads that expressly called for Lincoln’s ouster—something unions couldn’t do before the Supreme Court’s Citizens United ruling in January.

In the end, Halter forced Lincoln into a runoff, but lost by 4 percentage points in the early June election. Halter’s loss dealt a stinging blow to unions and cast doubt on their electoral clout. Conservative pundit Michael Barone wrote, “Lincoln’s victory removes the credibility of the unions’ threat to end the careers of Democrats who don’t do their bidding. The unions rode into Arkansas like Custer rode into Little Big Horn, and unlike Custer they managed to ride out—but without the scalp they were desperately seeking.”

Whether the unions’ credibility is all but lost, as Barone suggests, is doubtful. After all, it’s far easier to influence House races than a blockbuster Senate primary like the Lincoln-Halter race, one on which the eyes of country were trained. (Also, Arkansas has one of the lowest rates of unionization in the country, so the unions had less pull there than they might elsewhere.) But as AFL-CIO rolls out the first stage of its 2010 battle plan, it’s worth watching how much of an effect labor really has on what’s shaping up to be a tumultuous midterm election.