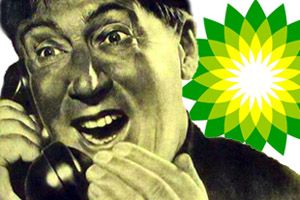 If you’ve been reading Mother Jones lately, you’ve heard about BP’s stranglehold on media access in the Gulf, which has included preventing reporters from visting oil-soaked public beaches and barring its spill cleanup workers from talking to the press. Now, one of BP’s ex-media enforcers is speaking out.

Former BP contractor Adam Dillon went public last Friday, telling a local news station in New Orleans that he was fed up with BP’s handling of the spill response, not least of all its information clampdown. In an interview with Mother Jones this week, Dillon, who claims he was fired for raising concerns about the cleanup with his bosses, elaborated on his experiences in the Gulf and vented his frustrations with BP.

A retired Army special operations soldier who lives in Wilmington, North Carolina (and is running for sheriff in his home county), Dillon first worked management* for BP on the beaches of Louisiana. In June, a camera crew caught him chasing reporters off a Grand Isle beach. Dillon was hired by O’Brian’s Response Management Group, which was in turn contracted by BP to hire an army of subcontractors to aid in various aspects of the the spill response, from cleanup workers to security guards to communications specialists. Based on his behind-the-scenes view of the spill response, he describes a cleanup effort in disarray, marred by unclear lines of authority and shoddy communications among the numerous players involved—from BP and its litany of contractors and subcontractors to the Coast Guard and local law enforcement agencies. “There’s just so many moving parts and moving pieces,” he says. “The right hand is just not talking to the left.” In BP’s attempts to control the flow of information, Dillon says, it has largely compounded these problems.”

But while Dillon says the company is bungling many aspects of the spill response, he notes that it has done a reasonably good job in one area: blocking the media from seeing the worst of the disaster in Grand Isle, a beach on a barrier island off Louisiana’s coast. “There was all kinds of stuff they didn’t want the media to see,” he says, describing areas thick with oil that were off-limits to journalists. “They kept it very strict what they wanted the media not to see, and what they wanted them to see. Where the media was actually given access to really was kind of mundane.”

While BP has insisted publicly that it has not prevented spill workers from talking to the press, Dillon says company officials made it perfectly clear to contractors that they would lose their jobs if they spoke to reporters. “There are people down on that beach that are begging to talk to reporters, because they’re having pay issues, having problems,” says Dillon of the workers in Grand Isle. “Any of those laborers that are down there are being told behind closed doors that if they talk to the media, they’ll be fired.”

To enforce its media blockade, Dillon says, the company turned to its security force, largely made up of guys like him, ex-military and law enforcement personnel. “They were given orders to herd the media away,” he says, and they followed those instructions just like he did. “They didn’t know the reason behind it—they were just told keep the media away from [the cleanup workers].” He adds, “That’s a First Amendment violation… You can’t keep the media away. It’s a public beach. We weren’t under Martial Law.”

After working on Grand Isle, Dillon was transferred to the Unified Command Center in Houma, Louisiana, the hub of BP and federal response activities, to work on cleanup logistics. He claims he was fired last week “because he was seen as a threat to superiors.” (Stephanie Hebert, a spokeswoman at the Unified Command Center, confirms he was a contractor there but declined to comment on his dismissal.) Specifically, he says BP axed him after taking photos of what he described as “equations on dispersants” and calling these pictures to the attention of his bosses. He says he was “confined and interrogated for almost an hour” about what he saw, and within 12 hours was dismissed from the command center. Dillon declined to elaborate on the dispersant issue when we spoke, but pledged to avenge his termination by calling attention to BP’s mishandling of the response.

“They screwed up royally when they let me go,” he says. “I was down there to do the right thing, to clean up. They just don’t know who they’re messing with.”

*This story has been updated to clarify Dillon’s role.