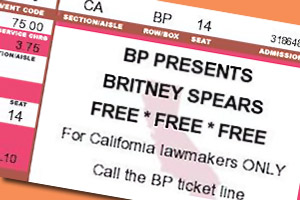 For more than a decade, BP has operated a hush-hush phone line that California lawmakers can call to request box seats to NBA games and concerts at the Sacramento stadium named after its West Coast subsidiary.

In the past five years, BP has given state officials more than 1,200 complimentary tickets to the Arco Arena, hosting them in its corporate suite to see Sacramento Kings games, World Extreme Cagefighting matches, and Britney Spears and Lil Wayne concerts. Getting the tickets is as easy as calling the BP ticket request line, an exclusive, unpublished phone number that appears to exist for the sole purpose of granting freebies to lawmakers, regulators, and their staffs.

“You make a request, leave it on the voicemail, and at some date the tickets either magically appear or they don’t,” says a legislative consultant who gave me the ticket line’s number and spoke on condition of anonymity. “They don’t talk to you; you just see ’em or you don’t.” The ticket line’s message was taken down sometime in the past week, shortly after I began my reporting. You can still listen to the original recording below.

BP has given away roughly $300,000 worth of tickets over the past 10 years, handing them out to everyone from lowly assembly clerks to top lawmakers. In March 2002, when the Sacramento Kings were locked in a playoff battle with the Los Angeles Lakers, 9 state senators and 12 state assembly members, including the speaker, pumped BP for the coveted seats. While serving as assembly speaker in 2006, Los Angeles Democrat Fabian Núñez and his family watched the Kings beat the Chicago Bulls on BP’s dime. During Democrat Karen Bass’ tenure as speaker between 2008 and 2010, 13 members of her staff tapped BP for tickets to see Disney on Ice, Tina Turner, and Madea’s Big Happy Family. Núñez and Bass did not accept requests for interviews.


Shows and sporting events California pols and officials attended on BP’s dime in 2009 and 2010:

The only official I contacted who would speak on the record about the ticket line was Assemblyman Bill Berryhill, a Republican from the Central Valley, who confirms that he asked for four passes to see Britney Spears last April. Her music is “tough to listen to,” he concedes, but the show “was all about the kids, man. It was for my daughters.” Berryhill says that he didn’t realize that his secretary had gotten the tickets from BP. Even so, Berryhill’s chief of staff, Evan Oneto, said his boss wouldn’t rule out taking tickets from the company in the future. Whether BP’s money is spent on free concert tickets or cleaning up the Gulf, he says, “is BP’s decision to make, not Bill’s.”

“There is only one reason why BP is giving legislative officials or administrative officials free tickets, and that is trying to create goodwill,” explains Bob Stern, the president of the Center for Governmental Studies, a political watchdog group in Los Angeles. “They are not giving them to the average Joe. It’s an absolute business decision.” In 2004, BP spokesman Dan Cummings told the Los Angeles Times that its Arco Arena suite seats 18, and that one-half to one-third of those seats are usually taken by company employees or guests. The rest are made available to state employees. “It’s for them to come out and for them to enjoy themselves,” he said. “We don’t tend to talk business with them.” BP did not respond to a request for comment on this story.

BP has handed out far more tickets to California lawmakers than have other oil companies or other companies with stadium-naming rights. Although Arco began the ticket giveaways before it merged with BP in 2000, the tickets remain a convenient political tool for BP, which uses them to curry favor with politicians while still technically complying with a proclamation in its corporate code that it “will make no political contributions, whether in cash or in-kind, anywhere in the world.” (Free tickets aside, that claim is pretty shaky, as The Washington Post recently pointed out.)

In 2006, BP gave away 321 Arco Arena tickets, more than in any year since. That same year, California lawmakers were debating and voting on AB32, the sweeping climate law that will go into effect later this year. BP has dedicated a significant chunk of its $600,000 California lobbying budget over the past year to weighing in on the implementation of the law, which includes a cap-and-trade system. BP’s California lobbyist, Ralph Moran, did not respond to requests for comment.

Some recipients of BP tickets are playing key roles in crafting the climate law’s landmark environmental policies. In 2008 and 2009, BP gave NBA tickets to Virgil Welch, a top policy advisor to the chairwoman of the California Air Resources Board (CARB), the state air-quality agency. It also gave Kings tickets to Dan Pellissier, then the deputy secretary for energy policy at the state environmental protection agency; Pellissier is now a deputy cabinet secretary advising Governor Arnold Schwarzenegger on energy and environmental policy.

This March, Schwarzenegger sent a letter to CARB urging it to embrace carbon offsets and to give polluting industries free emissions permits under AB32’s cap-and-trade system—approaches opposed by environmental groups but backed by BP’s lobbyists. Rachel Arrezola, a spokeswoman for the governor, would not say whether Pellissier had helped the governor draft the letter. She responded to a question about his basketball tickets in a short email. “The Governor has a very strict no gift policy that he expects his staff to follow,” she wrote. “Before Mr. Pellissier joined the governor’s office, he attended a Kings game in February 2009 paid for by BP. He followed all [state ethics] rules regarding the gift.”

BP has also given tickets to a consultant for the California Senate’s Transportation and Housing Committee, which is currently holding hearings on the state’s low-carbon fuel standard. Tickets also went to staffers for state Sen. Roderick Wright, a Democrat from Los Angeles, who sits on the Senate’s Energy, Utilities, and Communications Committee.

Such freebies are illegal at the national level; the Honest Leadership and Open Government Act of 2007 prohibits federal lawmakers and their staffers from accepting tickets and other gifts from lobbyists or companies that hire lobbyists. But they’re completely legal in many states, including California. The BP ticket line’s three-minute recorded message included detailed instructions on how to accept tickets without violating limits on political gifts. “Before making your request,” it says, “please be aware that…all tickets provided to a reportable individual and their families or friends…will count towards a reportable individual’s annual gift limit.” California caps the value of a donor’s gifts to an individual government official and their relatives at $420 annually.

Stern says the ticket giveaways illustrate why California’s ethics rules need to be tightened. “These tickets, in a sense, are worth more than their face value,” Stern says. The third-smallest stadium in the NBA, the Arco Arena has some of the basketball league’s highest ticket prices and sells out nearly every game. It’s also unclear whether the face value of the free tickets, which BP has reported as being as much as $170 for Kings games, reflect their actual cost to the company. Arco Arena would not disclose the price of a corporate suite.

Now that the BP ticket request line isn’t picking up, lawmakers may have to find a new way to score free tix from the world’s most-hated oil company. But the persistent can always give it a try: (916) 444-7968.