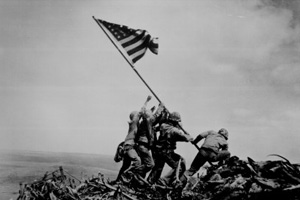 When I was a kid in the 1970s, I loved reading accounts of American heroism from World War II. I remember being riveted by a book about the staunch Marine defenders of Wake Island and inspired by John F. Kennedy’s exploits saving the sailors he commanded on PT-109. Closer to home, I had an uncle—like so many vets of that war, relatively silent on his own experiences—who had been at Pearl Harbor when the Japanese attacked on December 7, 1941, and then fought them in a brutal campaign on Guadalcanal, where he earned a Bronze Star. Such men seemed like heroes to me, so it came as something of a shock when, in 1980, I first heard Yoda’s summary of war in The Empire Strikes Back. Luke Skywalker, if you remember, tells the wizened Jedi master that he seeks “a great warrior.” “Wars not make one great,” Yoda replies.

Okay, it was George Lucas talking, I suppose, but I was struck by the truth of that statement. Of course, my little epiphany didn’t come just because of Yoda or Lucas. By my late teens, even as I was gearing up for a career in the military, I had already begun to wonder about the common ethos that linked heroism to military service and war. Certainly, military service (especially the life-and-death struggles of combat) provides an occasion for the exercise of heroism, but even then I instinctively knew that it didn’t constitute heroism.

Ever since the events of 9/11, there’s been an almost religious veneration of US service members as “Our American Heroes” (as a well-intentioned sign puts it at my local post office). That a snappy uniform or even intense combat in far-off countries don’t magically transform troops into heroes seems a simple point to make, but it’s one worth making again and again, and not only to impressionable, military-worshipping teenagers.

Here, then, is what I mean by “hero”: someone who behaves selflessly, usually at considerable personal risk and sacrifice, to comfort or empower others and to make the world a better place. Heroes, of course, come in all sizes, shapes, ages, and colors, most of them looking nothing like John Wayne or John Rambo or GI Joe (or Jane).

“Hero,” sadly, is now used far too cavalierly. Sportscasters, for example, routinely refer to highly paid jocks who hit walk-off home runs or score game-winning touchdowns as heroes. Even though I come from a family of firefighters (and one police officer), the most heroic person I’ve ever known was neither a firefighter nor a cop nor a jock: She was my mother, a homemaker who raised five kids and endured without complaint the ravages of cancer in the 1970s, with its then crude chemotherapy regimen, its painful cobalt treatments, the collateral damage of loss of hair, vitality, and lucidity. In refusing to rail against her fate or to take her pain out on others, she set an example of selfless courage and heroism I’ll never forget.

In local post offices, as well as on local city streets here in central Pennsylvania, I see many reminders that our troops are “hometown heroes.”  Official military photos of these young enlistees catch my eye, a few smiling, most looking into the camera with faces of grim resolve tinged with pride at having completed basic training. Once upon a time, as the military dean of students at the Defense Language Institute in Monterey, California, I looked into such faces in the flesh, congratulating young service members for their effort and spirit.

I was proud of them then; I still am. But here’s a fact I suspect our troops might be among the first to embrace: the act of joining the military does not make you a hero, nor does the act of serving in combat. Whether in the military or in civilian life, heroes are rare—indeed, all-too-rare. Heck, that’s the reason we celebrate them. They’re the very best of us, which means they can’t be all of us.

The short answer is: There’s a good deal wrong, and a good deal of harm done, not so much to them as to us.

*By making our military a league of heroes, we ensure that the brutalizing aspects and effects of war will be played down. In celebrating isolated heroic feats, we often forget that war is guaranteed to degrade humanity. “War,” as writer and cultural historian Louis Menand noted, “is specially terrible not because it destroys human beings, who can be destroyed in plenty of other ways, but because it turns human beings into destroyers.”

When we create a legion of heroes in our minds, we blind ourselves to evidence of their destructive, sometimes atrocious, behavior. Heroes, after all, don’t commit atrocities.  They don’t, for instance, dig bullets out of pregnant women’s bodies in an attempt to cover up deadly mistakes. They don’t fire on a good Samaritan and his two children as he attempts to aid a grievously wounded civilian. Such atrocities and murderous blunders, so common to war’s brutal chaos, produce cognitive dissonance in the minds of many Americans who simply can’t imagine their “heroes” killing innocents. How much easier it is to see the acts of violence of our troops as necessary, admirable, even noble.

*By making our military generically heroic, we act to prolong our wars. By seeing war as essentially heroic theater, we esteem it even as we excuse it. Consider, for example, Germany during World War I, a subject I’ve studied and written about. Now, as then, and here, as there, the notion of war as heroic theater became common. And when that happens, war’s worst excesses are conveniently softened on the “home front,” which only contributes to more war-making. As the historian Robert Weldon Whalen noted of those German soldiers of nearly a century ago, “The young men in field-grey were, first of all, not just soldiers, but young heroes, Junge Helden. They fought in the heroes’ zone, Heldenzone, and performed heroic deeds, Heldentaten. Wounded, they shed hero’s blood, Heldenblut, and if they died, they suffered a hero’s death, Heldentod, and were buried in a hero’s grave, Heldengrab.”  The overuse of helden as a modifier to ennoble German militarism during World War I may prove grating to our ears today, but honestly, is it that much different from America’s own celebration of our troops as young heroes (with all the attendant rites)?

*By insisting programmatically on American military heroism, we also lay a firm foundation for potentially dangerous post-war myths, especially of the blame-mongering “stab-in-the-back” variety. After all, once you have a league of heroes, how can you assign responsibility for costly, debilitating, perhaps even lost wars to them?  It’s just a fact that heroes don’t lose. And if they’re not responsible, and their brilliant, super-competent leaders (General “King David” Petraeus springs to mind) aren’t responsible—then it’s only a small step to assigning blame to weak-willed civilians and so-called unpatriotic elements on the “home front,” especially since we’re not likely to credit our enemies for much. By definition, cravenly hiding among civilians as they do, our enemies are just about incapable of behaving heroically.

Of Young Heroes and Front Pigs

In rejecting the “heroic” label, don’t think we’d be insulting our troops. Quite the opposite: we’d be making common cause with them, for most of our troops undoubtedly already reject the “hero” label, just as the young “heroes” of Germany did in 1917-18.  With the typical sardonic humor of front-line soldiers, they preferred the less comforting, if far more realistically descriptive label (given their grim situation in the trenches) of “front pigs.”

Whatever nationality they may be, troops at the front know the score. Even as our media and our culture seek to elevate our troops into the pantheon of demi-gods, our “front pigs” carry on, plying an ancient and brutal trade. Most simply want to survive and come home with their bodies, their minds, and their buddies intact. Part of the world’s deadliest war machine, they are naturally concerned first about saving their own skins, and only secondarily worried about the lives of others. This is not beastliness. Nor is it heroism. It’s simply a front pig’s nature.

So, next time you talk to our soldiers, Marines, sailors, or airmen, do them (and your country) a small favor. Thank them for their service. Let them know that you appreciate them. Just don’t call them heroes.

William J. Astore, a retired lieutenant colonel (USAF) and TomDispatch regular, teaches History at the Pennsylvania College of Technology. He welcomes reader feedback at wjastore@gmail.com. Check out the latest TomCast audio interview in which Astore discusses heroism and the military by clicking here, or to download to your iPod, here.